The Pentagon said that this will 'strengthen India's ability to defend its homeland and deter regional threats'. 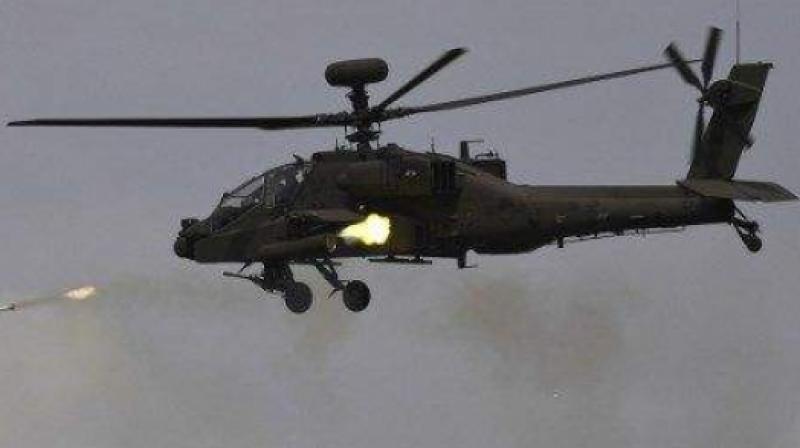 Washington: The Trump administration has approved a deal to sell six AH-64E Apache attack helicopters to India for USD 930 million, the Pentagon said on Wednesday, underlining that this will strengthen India's ability to defend its homeland and deter regional threats.

Pentagon's Defence Security Cooperation Agency notified the Congress about the State department's decision in this regard. The sale is expected to pass through if no lawmaker opposes this.

In its notification to the Congress, the Pentagon said, "This will strengthen India's ability to defend its homeland and deter regional threats."

"This support for the AH-64E will provide an increase in India's defensive capability to counter ground-armored threats and modernise its armed forces. India will have no difficulty absorbing the helicopters and support equipment into its armed forces,” the Pentagon said.

"The proposed sale of this equipment and support will not alter the basic military balance in the region,” it added.

The lead contractors are US arms, aviation and engineering giants Lockheed Martin, General Electric and Raytheon. Bilateral defence trade between India and the United States has risen from near zero to USD 15 billion since 2008.

“India is projected to spend billions on military modernisation over the next decade, and we are eager to seize opportunities for American industry. These sales support our security cooperation while also generating jobs at home," a State Department official told news agency PTI.

The notification to the Congress comes ahead of the 2+2 dialogue between India and the US in July in Washington DC involving the External Affairs Minister and the Defence Minister and their American counterparts. A formal announcement in this regard is expected to be made shortly.

"Next month's inaugural 2+2 Dialogue is an important opportunity for us to enhance our engagement on critical diplomatic and security priorities. The dialogue is an indication of the deepening strategic partnership between the United States and India and India's emergence as a leading global power and net security provider in the region,” the State Department official said.

Noting that India and the United States share enduring interests and values as the oldest and largest democracies, the official said India is a key partner in America's efforts to ensure that the Indo-Pacific is a region of peace, stability and growing prosperity.

“US-India defence and security cooperation continues to undergo a rapid expansion as part of our deepening strategic partnership. India is now one of our premier security partners in the Indo-Pacific region,” the official said.

India-US defence trade cooperation continues to expand, including through the US-India Defence Trade and Technology Initiative, a partnership begun in 2012 which seeks to create opportunities for US-India co-production and co-development, foster science and technology cooperation, and remove bureaucratic barriers to trade, the official said.

In 2016, India was also awarded the status of a US Major Defence Partner, which allows India to receive license-free access to a wide range of military and dual-use technologies that are regulated by the Department of Commerce.

The two countries also agreed to an updated ten-year Defence Framework Agreement in June 2015 to guide and expand their bilateral defence and strategic partnership until 2025.

India participates in the International Military Education and Training (IMET) programme and has received at least USD 1 million of IMET funding since 2003 for the purpose of facilitating Indian participation in professional military education courses at Department of Defense institutions of higher learning like the National Defense University and Naval War College. Seven of the last commanders of the Indian Navy have been IMET graduates.

India is one of the largest contributors of UN peacekeepers, with over 50 years of experience as a troop and police contributing country. India is also an active partner in the Global Peace Operations Initiative (GPOI), a Department of State-led effort to train and equip partner countries for peacekeeping missions.