Wesley Mathews was also indicted on Friday on charges of abandoning a child and tampering with evidence. 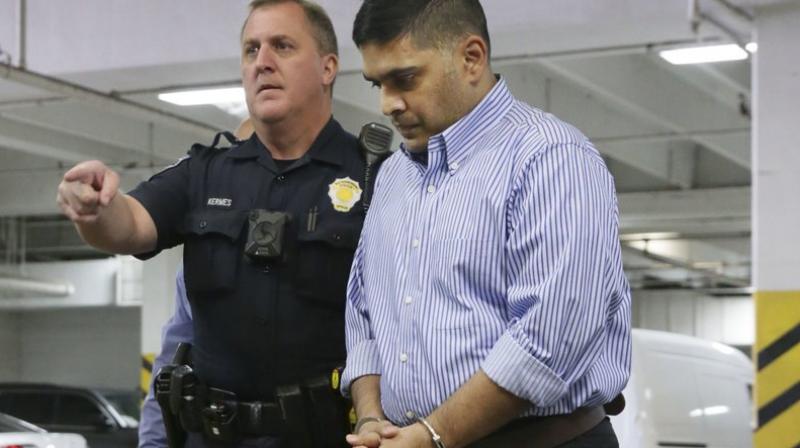 Prosecutors said the murder charge, which could carry the death penalty, was filed after an autopsy determined the girl died from 'homicidal violence.' (Photo: AP)

: The father of a 3-year-old girl adopted from an Indian orphanage was indicted on a capital murder charge on Friday, nearly three months after the girl’s body was found in a culvert near their suburban home.

Wesley Mathews, 37, has been jailed on a lesser charge in since shortly after his daughter, Sherin, was found dead. Prosecutors said the murder charge, which could carry the death penalty, was filed after an autopsy determined the girl died from “homicidal violence.”

Mathews initially said his daughter disappeared after he sent her outside as punishment for not drinking milk around 3 am on October 7. But after her body was found, he told police she choked to death and that he removed her body from the family’s home in Richardson, about 15 miles (24 kilometers) north of Dallas.

Authorities haven’t said what they believe happened to the girl, and court documents only allege that Mathews caused his daughter’s death using a deadly weapon “by a manner and means unknown to the grand jury.”

“We have some information in terms of what might have happened, but we are still investigating,” District Attorney Faith Johnson said during a Friday news conference, adding that her office had not decided whether it would seek the death penalty.

The girl’s mother, Sini Mathews, hasn’t been charged in the death but is jailed on a separate child abandonment charge stemming from when she and her husband left Sherin home alone — the day before the girl was reported missing. Her attorney has previously said she played no role in Sherin’s death.

Johnson said evidence in the case was still unfolding but that there was no indication anyone outside of Sherin’s parents were involved in the death.

Wesley Mathews was also indicted on Friday on charges of abandoning a child and tampering with evidence. He was initially charged in October, 2017, with felony injury to a child and his bond was set at USD 1 million.

He reported his daughter missing on October 7, sparking a broad search involving numerous law enforcement agencies before her body was found on October 22. The local police chief said it’s been an intense case for his officers.

“There is virtually no employee in the Richardson Police Department who has not been involved in this case,” Police Chief Jimmy Spivey said on Friday. “I am happy we are in a place where we can bring justice for this child.”

In his initial report to police, Wesley Mathews said he waited several hours to report the girl missing and had done laundry as he waited for her to come home. He told investigators the girl had developmental disabilities and was malnourished.

He described a special diet regimen in which she had to eat whenever she was awake in order to gain weight. Workers at the orphanage where the girl had been living before her adoption in June 2016 disputed the child was malnourished.

Weeks later, when a search dog found the girl’s body in a pipe that runs under a roadway, Mathews came to the police station in Richardson to change his account. According to court records, he told police he had been helping the girl drink milk when she choked, and when he eventually felt no pulse, he believed the child had died. Investigators wrote that he “then admitted to removing the body from the home.”

The affidavit does not say whether Mathews administered any medical aid to his daughter.