'I did go to India for what could only be considered highly successful consultations between world's two largest democracies,' Mattis said. 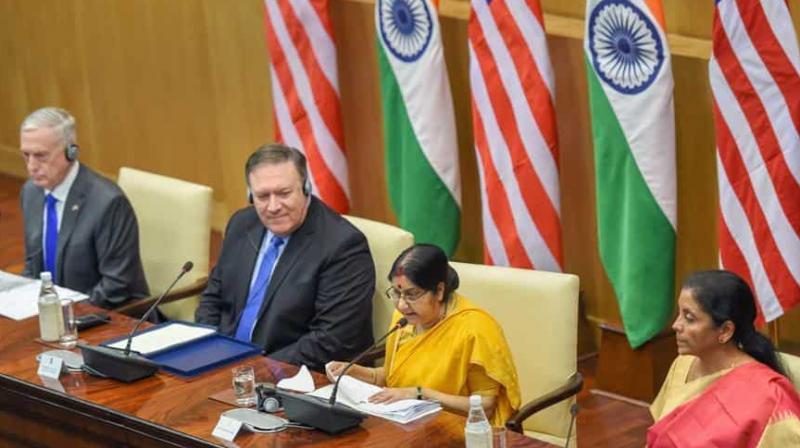 Sushma Swaraj and Nirmala Sitharaman held the crucial talks with Mattis and US Secretary of State Mike Pompeo in New Delhi on September 6. (Photo: File)

Washington: The "highly successful" first 2+2 Dialogue between India and the United States was a "defining moment" and the defence co-operation between the two countries is on the right track, US Defence Secretary James Mattis said here Tuesday.

"Last week I did go to India for what could only be considered highly successful consultations between the world's two largest democracies. There was no difficulties that we uncovered there in moving forward on a number of pragmatic steps to draw ourselves closer together in terms of security," Mattis told reporters at the Pentagon here.

"It was a very heartening trip, historic I'd even say, as you look at where we've been over so many years as we've grown closer and closer together," Mattis said.

He specifically pointed to the COMCASA agreement, the communications compatibility and security agreement, which he said opens a lot of doors in "terms of defence cooperation".

"Probably we will look back on the 2+2, where Secretary Pompeo led the two of us in there as our senior diplomat. Probably a defining moment for the relationship between the US and India, and one that we think is absolutely on the right track in terms of defense cooperation,” Mattis said.

Mattis was echoed by the US State Department later in the day. "Last week's 2+2 Ministerial Dialogue was a historic milestone in the US-India relationship and an indication of the deepening strategic partnership between the United States and India, and India's emergence as a global power and net security provider in the region," a State Department spokesperson told PTI.

Asserting that the two countries want to grow their trade relationship in a fair and reciprocal manner, the spokesperson said at the 2+2 dialogue, both sides acknowledged that expanding fair and reciprocal trade was in their shared interests and would contribute to the prosperity of both "of our peoples".

"Both sides committed to further expanding and balancing the trade and economic partnership consistent with their leaders' 2017 joint statement, including by facilitating trade, improving market access, and addressing issues of interest to both sides," the spokesperson said.