United States dropped initial demands for a full oil embargo and a freeze on the foreign assets of North Korean leader Kim Jong-Un. 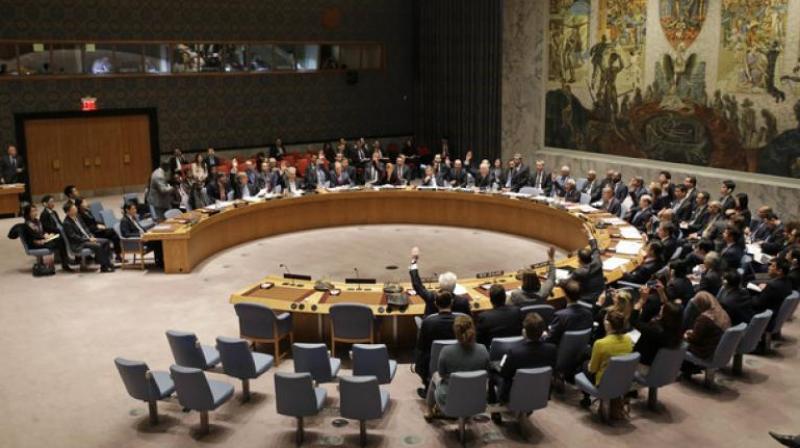 The resolution, passed after Washington toned down its original proposals to secure backing from China and Russia, came just one month after the council banned exports of coal, lead and seafood in response to North Korea's launch of an intercontinental ballistic missile (ICBM).

US Ambassador Nikki Haley said the tough new measures were a message to Pyongyang that "the world will never accept a nuclear-armed North Korea," but she also held out the prospect of a peaceful resolution to the crisis.

"We are not looking for war. The North Korean regime has not yet passed the point of no-return," Haley told the council, adding: "If North Korea continues its dangerous path, we will continue with further pressure. The choice is theirs."

During tough negotiations, the United States dropped initial demands for a full oil embargo and a freeze on the foreign assets of North Korean leader Kim Jong-Un.

The resolution instead bans trade in textiles, cuts off natural gas shipments to North Korea, places a ceiling on deliveries of refined oil products and caps crude oil shipments at current levels.

It bars countries from issuing new work permits to North Korean laborers sent abroad -- there are some 93,000, providing Kim's regime with a source of revenue to develop its missile and nuclear programs, according to a US official familiar with the negotiations.

Under the measure, countries are authorized to inspect ships suspected of carrying banned North Korean cargo but must first seek the consent of the flag-state.

Joint ventures will be banned and the names of senior North Korean official and three entities were added to a UN sanctions blacklist that provides for an assets freeze and a global travel ban.

It was the eighth series of sanctions imposed on North Korea since it first tested a nuclear device in 2006.

- 'Concrete action' -
Seoul welcomed the resolution, calling it a "grave warning that (North Korea's) continued provocations will only intensify its diplomatic isolation and economic pressure."

Japan's Prime Minister Shinzo Abe said the sanctions were much stronger than earlier measures and urged Pyongyang to take "concrete action" toward denuclearization.

The United States and its allies argue that tougher sanctions will pile pressure on Kim's regime to come to the negotiating table to discuss an end to its nuclear and missile tests.

Russia and China are pushing for talks with North Korea, but their proposal for a freeze on Pyongyang's missile and nuclear tests in exchange for suspending US-South Korean military drills has been rejected by the United States.

China, North Korea's sole ally and main trading partner, had strongly objected to an oil embargo initially sought by the United States out of fear that it would bring the North's economy to its knees.