World   Americas  12 Aug 2020  If not now, when?: Black women seize political spotlight in US
World, Americas 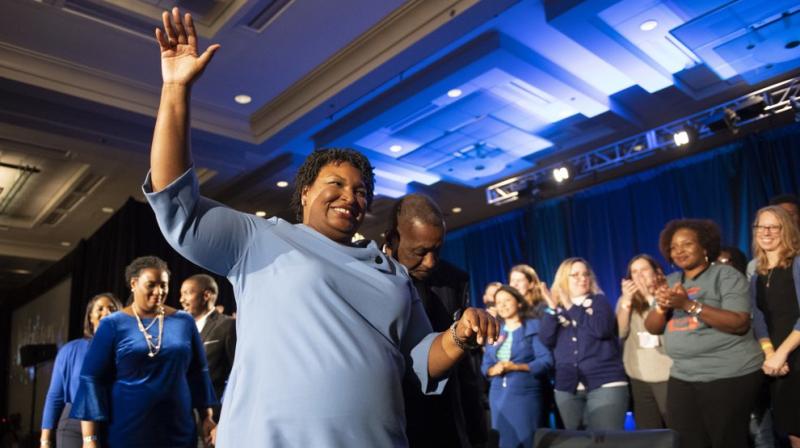 Marietta: The little girl ran up to her, wide-eyed and giddy. "Are you Charisse Davis?" the fourth grader asked.

Davis was stunned. A former kindergarten teacher and librarian, she was more accustomed to shuttling her two sons to basketball practice than being seen as a local celebrity.

But now she had been elected the only Black woman on the Cobb County School Board, gaining office in a once conservative suburban community where people who look like her rarely held positions of power.

"I love your hair. Your hair looks like my hair," the girl squealed, calling friends over.

It was a moment both innocent and revealing: Not just a child seeing herself in an elected leader, but also a reflection of the rapidly building power of Black women.

It's a momentous change that could make history on a national ticket and determine the outcome of the presidential race.

Black women have long been the heart of the Democratic Party among the party's most reliable and loyal voters but for decades that allegiance didn't translate to their own political rise.

And the people representing them instead have not met their needs: Disparities in education and opportunity resulted in Black women making on average 64 cents for every dollar a white man makes.

And countless cases of police brutality have left many Black women terrified every time their children pulled out of the driveway, fearing that they might not make it home alive.

The milestone comes after years of political work across America, where Black women have been running and winning elections in historic numbers, from Congress to county school boards.

This transformation is taking place in once unlikely places, suburban counties in the South. Places like Cobb, a rambling expanse of strip malls and subdivisions just north of Atlanta that doubled in population midway through the last century as white people fled the city.

The year Charisse Davis was born, 1980, Cobb County was 4.5 per cent African American. Now it's more than 27 per cent Black and 13 per cent Hispanic.

Its politics caught up with its demographics: In 2016 Hillary Clinton was the first Democratic presidential candidate to eke out a win in Cobb County since Jimmy Carter, a Georgian, in 1976.

President Donald Trump's presidency, which has fueled racial divisions and appealed to white grievance, unleashed for some here an overwhelming urgency. They added their names to down-ticket ballots; they canvassed; they knocked on doors.

When Stacey Abrams, a Black progressive Democrat, ran for governor in 2018, she focused her campaign on women of color.

Although Abrams lost narrowly statewide, she won Cobb County handily. Meanwhile, Lucy McBath, a Black mother whose 17-year-old son was killed by a white man who thought his music was too loud, won a congressional seat that includes part of the county, a district once held by conservative firebrand Newt Gingrich.

Charisse Davis looked at the school board members and saw no Black women, so she ran and won. Another Black woman became the chair of the county's young Republicans. Two joined the Superior Court bench. A teenager ran for class president, and she won, too.

We've been watching from the sidelines and allowing other people to take their turns, and take these positions of power, Davis said. Now here we are to essentially fix it.

The first county Democratic Party meeting after Trump's election was standing room only.

It was almost like a support group. We had to be together, we had to grieve and yell, Davis said.

What happened? Across the county, there was soul searching over how Clinton lost white, working-class voters, but much less on why Democrats also lost some of the support of this core constituency.

Historically Black women vote in extraordinary numbers, and they don't vote alone: They usher their families, their churches, their neighbors to the polls.

But in 2016, African Americans did not turn out in the numbers the party had come to expect. For the first time in 20 years, their turnout declined in a presidential election.

About 70 per cent of eligible Black women voted in 2012 when President Barack Obama, the first Black president, secured a second term. But in 2016 that number slipped to 64 per cent, its pre-Obama level.

While there were multiple reasons for Clinton's loss, including a large defection of white voters, some saw the drop-off as a sign that Black voters had been taken for granted.

Organizations sprang up across the country to motivate Black women to organize, run and win.

We have never been at this moment, said Aimee Allison, who in 2018 founded the network She the People, which is working to turn out a million women of colour across seven battleground states.