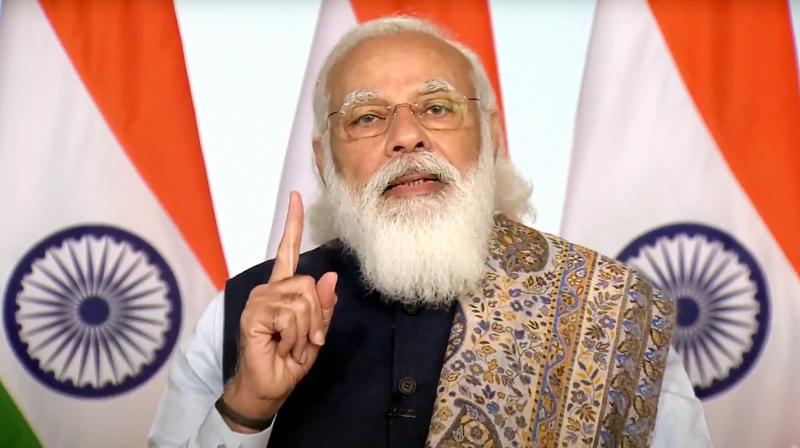 Sources said that the Indian role in the Quad vaccine initiative will “project and reinforce India’s credentials as a trusted, reliable manufacturer and supplier of quality vaccines”. (PTI file photo)

New Delhi: US President Joe Biden, Prime Minister Narendra Modi and the Prime Ministers of Japan and Australia will discuss the Covid vaccine initiative as the “most significant among the deliverables” at their Quad summit in virtual format on Friday, under which “vaccines will be developed in the United States, manufactured in India, financed by Japan and the US, and supported by Australia”, sources said on Thursday evening. The “vaccine initiative will allow new manufacturing capacity to be added in India for exports to the Indo-Pacific region and will not impinge on our existing manufacturing capacities”, the sources said, adding that “this pooling of individual capacities and strengths by the Quad countries is aimed at expediting global vaccine delivery and will help meet the demand-supply gap, focusing on the Indo-Pacific region”. Sources also noted that the “Quad’s model of enlightened, humanitarian collective action through supply of Covid-19 vaccines will also offer a template for peace, cooperation and prosperity in the Indo-Pacific region”.

Observers see the move as a major boost to India which has been playing a global leadership role in disbursing Covid-19 vaccines to several needy countries across the world, with China being the other major competitor. Observers also point out that American and Japanese economic muscle along with American efforts at development of vaccines will enormously strengthen New Delhi’s own efforts at increasing its vaccine capacities, especially for the Indo-Pacific region, and will pose a stiff coordinated challenge to the Chinese efforts.

Sources meanwhile said the Quad Summit, the first such meeting at the top leadership level, “offers an opportunity for an evolution” in terms of now looking to have “definite areas of cooperation” instead of only “discussions on principles and shared strategic approaches” which was the case till now.

Sources said that the Indian role in the Quad vaccine initiative will “project and reinforce India’s credentials as a trusted, reliable manufacturer and supplier of quality vaccines” and “will appreciably expand our Vaccine Maitri effort”. Sources added that “it will strengthen India’s standing as the ‘pharmacy of the world’, as a critical node in global health supply chains, and as a selfless contributor to global health security”.

Sources said for India, “the summit is of importance as it builds crucial partnerships to address challenges in the Indo-Pacific region” and that “securing the maritime domain is important”. The Indo-Pacific region extends from the eastern shores of Africa to the western coasts of the Americas.

Apart from US President Biden and Mr Modi, Australian PM Scott Morrison and Japanese PM Yoshihide Suga will be the other two participants at the “historic summit, the first leadership-level engagement for Quad”, and “will discuss regional and global issues of shared interest, and exchange views on practical areas of cooperation towards maintaining a free, open and inclusive Indo-Pacific region”. Sources said the summit “will also “provide an opportunity to exchange views on contemporary issues such as post-pandemic recovery, resilient supply chains, emerging and critical technologies, maritime security, and climate change”. Observers see the agenda as significant, given the Chinese economic and military assertiveness in the region.

As is well known, the four-nation Quad (Quadrilateral Security Dialogue) is a dialogue platform of like-minded countries (India, the United States, Australia and Japan) that share certain attributes (democracy, pluralism and market-based economy) and have “growing convergences in strategic and security perceptions, especially in the Indo-Pacific region” sources said. While there is no institutionalised secretariat, discussions are focused on emerging global challenges and geopolitical issues. Earlier this year, for the first time, the four countries appointed sherpas to coordinate Quad-related issues, with foreign secretary Harsh Vardhan Shringla being the Indian sherpa.