The burial location had been kept a secret, considering the intense press and social media attention in the case. 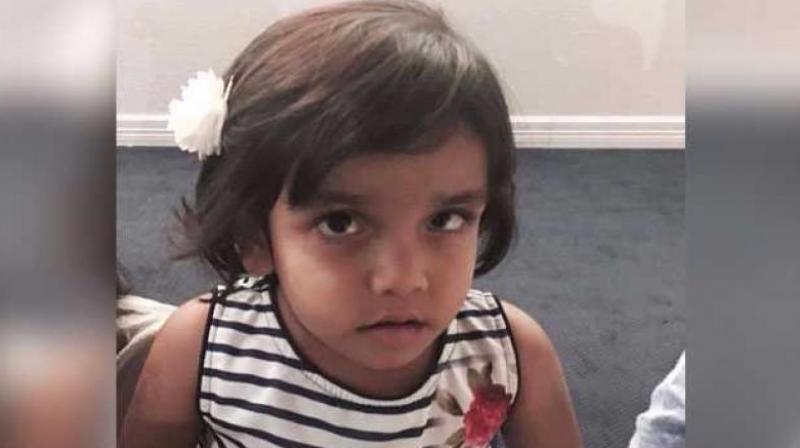 Sources close to the family told WFAA television network that they wanted to wait until the headstone had arrived before releasing the location to the public. (Photo: File)

Houston: Seven weeks after Sherin Mathews' body was found in a culvert by a cadaver dog, the location of the 3-year-old Indian toddler's final resting place has been revealed.

A private ceremony was held on October 31 for Sherin, the adopted daughter of Indian-American couple Wesley Mathews and Sini Mathews, who was found dead in mysterious circumstances a culvert close to their home in suburban Dallas.

At that time, the burial location was kept a secret, considering the intense press and social media attention in the case.

Sources close to the family told WFAA television network that they wanted to wait until the headstone had arrived before releasing the location to the public.

The family said they are now comfortable sharing that her headstone is located in the southwest portion of the cemetery at the Turrentine-Jackson-Morrow Funeral Home in Dallas, Texas.

"She's in a better place than we all are," a woman who attended Sherin's prayer vigil several weeks back said while requesting anonymity.

"None of us even met her but the pictures and her smile has been haunting everyone," she said.

The soil around the headstone is still fresh and that headstone reads her full name "Sherin Susan Mathews," the WFAA report says.

Read: Sherin’s father turned off location, went shopping before dumping her body with bag of trash

Sherin's body was found on October 22 after she disappeared from her family's home on October 7. Her adoptive father Wesley told police that he put her outside their home at 3 a.m. to discipline her for not drinking her milk.

His story changed after her body was found in a culvert, telling police that he "physically assisted" with pouring the milk down Sherin's throat and then moved her body after he realised she had choked and died.

Wesley was arrested and charged with felony injury to a child. He's still in the Dallas County jail on a USD 1 million bond. His wife, Sini, faces a charge of child endangerment and is on a USD 250,000 bond.

The Richardson Police Department and the FBI are still probing Sherin’s case and the Dallas Medical Examiner’s Office has not yet released the autopsy report.

The Indian-American couple from Kerala has a 3-year-old biological daughter, who was taken away by Child Protective Services after Sherin went missing. She is now living with a family member in Houston.

The headstone also reads "Moment In Our Arms, Lifetime In Our Hearts." A source close to the family told WFAA that those words were chosen by Wesley, Sherin’s adoptive father.