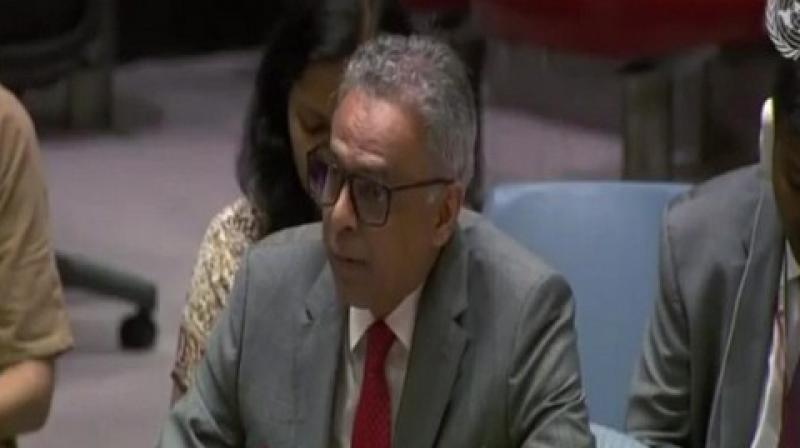 Dawood Ibrahim is wanted in India to face the law of the land for carrying out serial blasts in Mumbai in 1993 in which scores of people were killed and injured. (Photo: ANI)

New York: India on Tuesday termed underworld don Dawood Ibrahim's D-Company's mutation from a criminal syndicate into a terror network "a real and present danger" in the region.

"In our region, we have seen the mutation of Dawood Ibrahim's criminal syndicate into a terrorist network known as the D-Company," said Syed Akbaruddin, India's Ambassador and Permanent Representative to the United Nations, in the UN Security Council.

"Its illegitimate economic activities may be little known outside, but for us, such activities as gold smuggling, counterfeit currency, arms and drug trafficking from a safe haven that declines to acknowledge even his existence, are a real and present danger," he stressed.

Akbaruddin made the comments during an open debate on 'Threats to International Peace and Security: Linkages between International Terrorism and Organised Crime'.

Dawood Ibrahim is wanted in India to face the law of the land for carrying out serial blasts in Mumbai in 1993 in which scores of people were killed and injured.

"Success of collective action to denude ISIL is a pointer that the Council's focused attention can and does yield results. A similar degree of interest in addressing threats posed by proscribed individuals, such as Dawood Ibrahim and his D-Company as well as proscribed entities, including the Jaish-e-Mohammad and Lashkar-e-Taiba, listed as affiliates of Al-Qaeda, under the 1267 sanctions regime, will serve all of us well," he said.

The Federal Bureau of Investigation (FBI) has suspected that Dawood Ibrahim is currently in Pakistan after secretly recording his close aide and Karachi-based businessman Jabir Motiwala, who was arrested in London in August last year.

Holding that the location of Dawood Ibrahim was never a secret, India had on July 4 said that the FBI's remark on the issue only reveals the double standards of Pakistan and its inability to take action against terror groups operating on its soil.

"The location of Dawood Ibrahim is not a secret. Time and again we have been presenting to Pakistan a list of people who are in their country. We have asked repeatedly that he should be handed over. His imprint on the Mumbai blast is very clear for all of us to see," External Affairs Ministry spokesperson Raveesh Kumar had said in a press briefing.

"You (Pakistan) claim that you have taken action but when it comes to taking action against people who we have demanded you go into denial mode. On the other hand, you try to project to the international community that you are taking some action against the terrorists operating from the soil," the spokesperson had added.

Akbaruddin stressed that collective action between countries is required to curb the flow of revenue generated by illicit activities of terror groups across borders.

"Revenues generated by illicit activities of terrorist and criminal groups are moved across borders and exchanged through open networks. This flow of resources, meant to produce violence and terror, needs to be stopped by states working together. Collective inter-state efforts are required, including at regional and sub-regional levels," he said.

"We also need to sensitise the private and public enterprises involved in facilitating legitimate transboundary financial flows and we should harness their support, so that they do not fall prey to malevolent objectives, in the vein of Osama bin Laden's string of retail honey shops," he added.