About 500 people were invited to the funeral, which followed memorial services last week in Minneapolis and Raeford, where Floyd was born 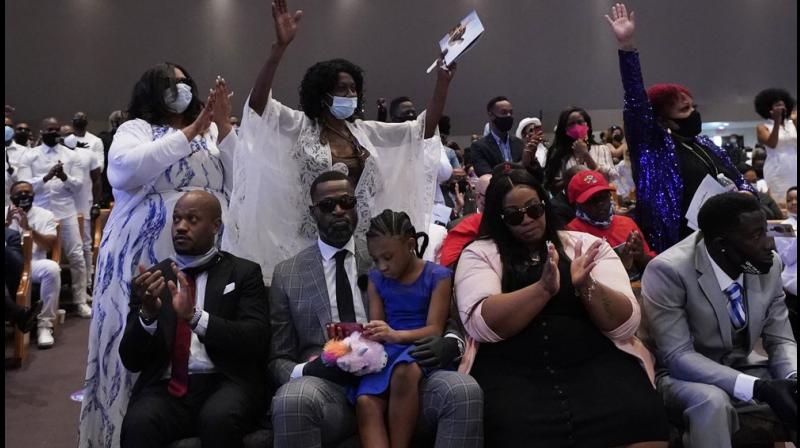 Sister of George Floyd, Zsa Zsa Floyd, both arms raised, attend the funeral service for Floyd at The Fountain of Praise church in Houston. AP photo

Civil rights leader Rev. Al Sharpton and other dignitaries joined friends and family of George Floyd at a Houston church on Tuesday to mourn the African American whose death in police custody inspired anti-racism protests around the world.

Outside the Fountain of Praise Church before the service, the streets were lined with American flags as those invited filed inside and onlookers stood in quiet respect. Flowers and bouquets were piled around a photograph of Floyd.

Sharpton will give the eulogy. The ministers presiding are Pastor Remus Wright Sr and co-pastor Mia Wright, who opened the service.

After the service, a funeral procession will travel about 15 miles (24 km) to Houston Memorial Gardens Cemetery in Pearland, Texas. His body will arrive at the cemetery in a horse-drawn carriage for burial alongside his mother.

Floyd, a 46-year-old African American who grew up in the Texas city, died on May 25 after a white police officer in Minneapolis pinned him with a knee to the neck for nearly nine minutes. A bystander’s video captured the incident in excruciating detail, including his saying “I can’t breathe” and crying out for his mother.

“It was the worst thing I ever could have imagined, watching him going from speaking and breathing to turning blue,” said Godfrey Johnson, 45, as he arrived at the church. Johnson, who wore an “I can’t breathe” T-shirt, attended Floyd’s high school and played football with him.

About 500 people were invited to the funeral, which followed memorial services last week in Minneapolis and Raeford, the North Carolina town where Floyd was born.

With the funeral taking place in the middle of the coronavirus pandemic when people are advised to wear masks over their mouths and noses, some mourners and onlookers wore masks that said, “I can’t breathe.”

Many family members were dressed in white dresses and suits.

Relatives lined up and took turns paying respects to Floyd at the final viewing and sealing of the bier at the front of the church before the ceremony, some of them shaking with emotion and one making the sign of the cross.

Family members of other black men killed in confrontations with white men attended.

The mother of Eric Garner, the New York man who died in a police chokehold, was at the church as well as the family of Ahmaud Arbery, a 25-year-old Georgia man who was shot and killed in February while jogging. Three white men are defendants in the case.

The New York Stock Exchange observed 8 minutes 46 seconds of silence for the start of the funeral, the length of time Floyd was pinned down.