Padura won international acclaim for 'The Man Who Loved Dogs', based on the agent who assassinated Soviet exile Leon Trotsky. 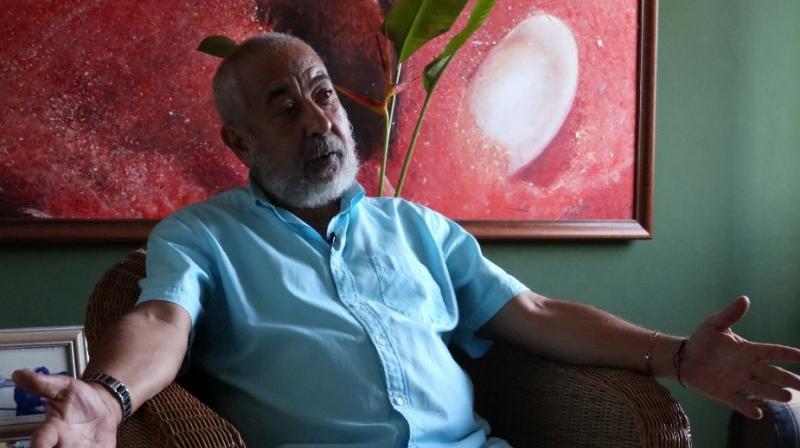 But Padura is perhaps best known for the series of novels starring his hard-drinking, heavy-smoking Havana detective. (Photo: AFP)

Havana: Detective fiction fans and literature buffs worldwide love Leonardo Padura; some watch his sleuth Mario Conde on Netflix. But back home in Communist Cuba, the author is virtually unknown.

"I am semi-visible," the grey-haired writer, 61, says with a smile.

He has spent the morning smoking and drinking coffee while working on the latest Conde novel in the Havana house where he continues to live and work.

Padura won international acclaim for his 2009 book "The Man Who Loved Dogs," a historical thriller about the agent who assassinated Soviet exile, Leon Trotsky.

A politically loaded tale for an author living in Communist Cuba, The New York Times likened it to the work of the Russian greats Tolstoy and Dostoyevsky.

But Padura is perhaps best known for the series of novels starring his hard-drinking, heavy-smoking Havana detective.

Lieutenant Conde was immortalised last year in a Netflix original mini-series. But with little internet access on the island, few Cubans are likely to see it.

With thousands of books sold and prizes under his belt, Padura could live comfortably abroad if he wanted to.

His novels have been translated into 20 languages. He spends four months a year abroad for publishing commitments.

But Padura says there is only one place where he can write: his home neighbourhood of Mantilla.

Dressed in shorts and sandals, he tends the banana and lemon trees in the grounds of the house, Villa Alicia, which he shares with his wife Lucia.

He even repairs the brickwork, with the help of a builder friend.

Cuba's regime repressed writers and intellectuals in the 1970s for criticising the Communist revolution.

"They were silenced and sidelined," Padura says.

He was not writing during that period. Like many Cubans -- including revolutionary leader Fidel Castro himself -- he had dreamed of becoming a baseball player. He worked for the Communist state media in the 1980s and 1990s. But later he became what he calls one of the government's "usual suspects."

Officials once judged from his work in a culture magazine that he had "ideological problems," and sent him to be "re-educated" to another publication. Even there he defied pressure and carried on "writing what I wanted," he says.

Artistic life became freer in the 1990s, even as the economy plunged, after the fall of Cuba's Communist protector, the Soviet Union.

Now Cuba is gradually opening up its economy and foreign relations. But uncertainty hangs over its warming ties with the United States under President Donald Trump.

With one eye on history, Padura notes that sales of George Orwell's dystopian allegory "1984" reportedly rose in the United States after Trump took office. "People are not finding answers in politics," Padura says.

With his reflections on nationalism and totalitarianism and his allegorical echoes of Soviet themes, Orwell in his time touched on some of the same subjects that Padura is covering.

But another planned event -- the presentation of a new edition of "The Man Who Loved Dogs" -- was cancelled by authorities without explanation.

Padura is used to being largely overlooked by the country's media. But he insists that he will not leave his country.

"Without Cuba, Leonardo Padura the writer would not exist," he said.