In northwestern Washington state, 330,000 acres burned in just 24 hours - more than in any of the last 12 fire seasons 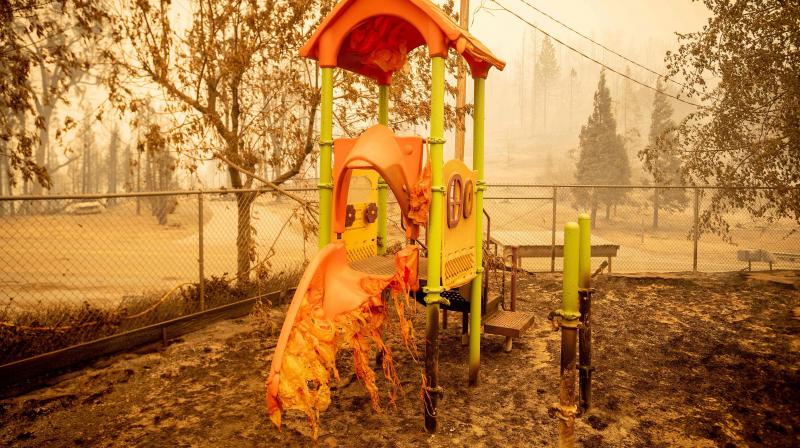 A melted slide smolders as a playground continues to burn at Pine Ridge school during the Creek fire in an unincorporated area of Fresno County, California on September 08, 2020. - Wildfires in California have torched a record more than two million acres, the state fire department said on September 7, as smoke hampered efforts to airlift dozens of people trapped by an uncontrolled blaze. (AFP)

Tollhouse: Dangerous dry winds whipped up California's record-breaking wildfires and ignited new blazes Tuesday, as hundreds were evacuated by helicopter and tens of thousands were plunged into darkness by power outages across the western United States.

The arrival of strong gusts after the Labor Day weekend's unprecedented temperatures saw most of California placed under severe weather warnings, with 14,000 firefighters battling 25 major wildfires across the country's most populous state.

More than 170,000 Californians were left without electricity as utility company PG&E enacted a "last resort" shutoff across large swathes of the state due to the extreme wildfire threat.

In northwestern Washington state, 330,000 acres burned in just 24 hours -- more than in any of the last 12 fire seasons, Governor Jay Inslee said.

"These fires are extraordinary. They are doing things we've never seen before as to how fast they spread," said Inslee. Another 100,000 people lost power due to high winds and fire in his state.

Rescue officials were on standby after concluding the evacuations of all known residents and tourists in the area, but a spokeswoman warned the operation "is not completely over."

Multiple homes were engulfed by flames in the nearby Tollhouse area overnight, while videos on social media showed the fire surrounding campsites around the popular holiday spot Mammoth Pool Reservoir.

The Creek Fire has ripped through more than 140,000 acres and was zero percent contained Tuesday.

"Strong offshore wind pattern is just arriving, & will affect new (and) existing fires for rest of day into tomorrow."

The three-week-old Bear Fire jumped its containment lines during fierce winds and was spreading at an "extreme rate" comparable to the nearby 2018 Camp Fire -- the deadliest in modern California history -- Swain added.

Evacuations were in progress from the closed Angeles National Forest, just north of the metropolis, with more than 8,500 acres (3,400 hectares) on fire in the blaze that broke out Sunday.

Santa Ana winds arriving Tuesday were expected to strengthen through to Wednesday morning, with gusts of 55 miles (88 kilometers) per hour.

"Existing fires are displaying extreme fire behavior, new fire starts are likely, weather conditions are worsening, and we simply do not have enough resources to fully fight and contain every fire," said Randy Moore, regional forester for the Pacific Southwest Region.

They came as overstretched firefighters were finally gaining ground on many of the lightning-caused fires in Northern California that ignited last month.

California has now seen more than 2.2 million acres burn in wildfires this year -- an annual record, with nearly four months of fire season still to come.

There have been eight deaths and more than 3,300 structures destroyed.

The small town of Malden in Washington was nearly totally razed, with 80 percent of its buildings including the fire station, post office and city hall "completely burned to the ground," the local sheriff said in a statement.

"The scale of this disaster really can't be expressed in words," said Sheriff Brett Myers. "The fire will be extinguished but a community has been changed for a lifetime. I just hope we don't find the fire took more than homes and buildings. I pray everyone got out in time."

Governor Inslee is due to visit Thursday, and said the town "looked like a bomb had gone off."