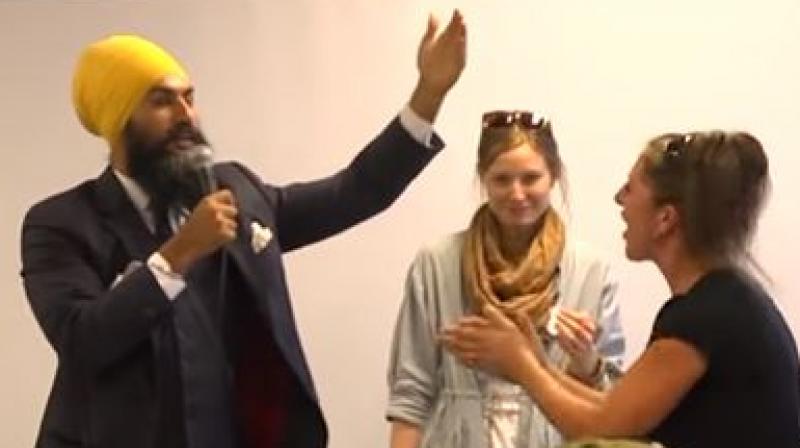 After four full minutes of her rant, the woman left the camping event after Singh attempted to postpone his address and was about to leave the dais. (Photo: Videograb)

Brampton: With an aim of spreading 'love and courage', an Indo-Canadian Sikh lawmaker on Friday calmly responds to a woman, who was yelling at him about Islamic sharia law at a community outreach programme in Ontario.

When Jagmeet Singh, Indian-origin lawmaker, was about to start his address in the event called ‘JagMeet and Greet’, a campaign event,  a woman in black t-shirt and blue jeans interrupted him, questioning about the Islamic Sharia law, a viral video showed.

Singh, who is running to lead the left-leaning New Democratic Party, or NDP, Canada's third largest party, was seen calmly answering indirectly to woman’s question that “We welcome you, we support you and we love you.”

When the organisers stepped in to stop the ruckus in the ongoing event, the woman threatened them not to touch her or she will call the police.

Responding to her rant and threatening, Singh addressing to the crowd present at the event said, “We’re not intimidated by hatefulness. Let her speak as much as she wants to. We have no problem with it,” Singh said, conceding that the situation was a little bit “awkward”.

According to a Canada based magazine, Vice, the woman “seemed to be spouting off the rhetoric of an anti-Islam women’s group called Suffragettes Against Silence who are familiar faces in the far-right, anti-Islam circle in Canada. This group believes that Islam is an existential threat to the woman of Canada”.

After four full minutes of her rant, the woman left the camping event after Singh attempted to postpone his address and was about to leave the dais.

Minutes after the woman stormed out, Singh said to the crowd, "You know growing up as a brown-skin, turbaned, bearded man that I've faced things like this before," adding further that “There's going to be other obstacles that we're going to face and we're going to face them with love and courage."

The incident was recorded by Brampton Focus, a local news outlet, which was later posted it on Facebook and got viral. The video has been viewed over 4 lakh times and shared over 3,000 times already.