Harvard and MIT sue Trump administration to save their foreign students 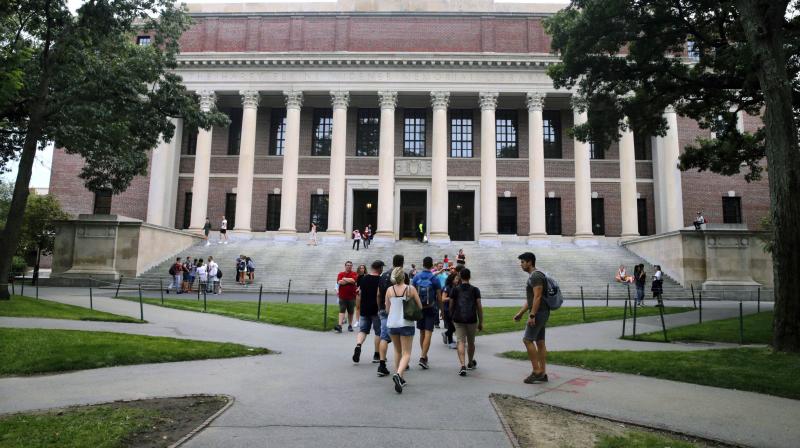 Students walk near the Widener Library in Harvard Yard at Harvard University in Cambridge. (AP)

Washington: Harvard University and the Massachusetts Institute of Technology have filed a lawsuit against the Immigration and Customs Enforcement's (ICE) latest rule that bars international students from staying in the United States unless they attend at least one in-person course.

In the lawsuit filed in the District Court of Boston on Wednesday, Harvard and MIT sought a temporary order and preliminary and permanent injunctive relief to bar the Department of Homeland Security and ICE from enforcing federal guidelines barring international students attending colleges and universities offering only online courses from staying in the country.

"In the lawsuit, we ask the court to prevent ICE and DHS from enforcing the new guidance and to declare it unlawful," MIT President Rafael Reif said.

"The announcement disrupts our international students' lives and jeopardises their academic and research pursuits. ICE is unable to offer the most basic answers about how its policy will be interpreted or implemented," he said.

"The guidance comes after many US colleges and universities either released or are readying their final decisions for the fall semester," Reif said.

"Their (international students) choices are either to transfer to another institution that provides in-person or hybrid (both in-person and online) instruction or to depart the country and risk not being able to return. Those students who fail to comply with this guidance may face deportation," said Harvard president Lawrence S Bacow.

"The order came without notice and its cruelty is only surpassed by its recklessness," he said.

"It appears that it was designed purposefully to place pressure on colleges and universities to open their on-campus classrooms for in-person instruction this fall, without regard to concerns for the health and safety of students, instructors, and others, he alleged.

"Harvard and MIT will pursue this case vigorously so that their international students continue their studies without the threat of deportation," Bacow said.

The lawsuit comes amidst a growing chorus from major universities, lawmakers and rights bodies, seeking reversal of the decision.

There are more than 200,000 Indian students in the US contributing over USD7 billion to the American economy per annum.

"Denying visas and deporting students who are not attending class in-person, when there may not be any in-person classes to attend, is cruel, unwarranted, and un-American," Gonzalez said, urging the Trump Administration to reverse its order on international students.

Advocacy coalition National Alliance for Humanities also issued an action alert calling on the ICE to reverse this decision and urging Members of Congress to pressure the ICE.

Under the new decision, international students enrolled in programs that have shifted online for the Fall in order to protect the health of campus communities during the COVID-19 crisis may face immigration consequences including, but not limited to, the initiation of removal proceedings.

This is to the detriment of not just international students, but to everyone who benefits from their presence on campus, said the alliance.

Senator Angus King has written a letter to Acting Secretary of Homeland Security Chad Wolf to reverse the ICE order and allow international students to remain in America to learn.

With this decision, the ICE is forcing the hand of schools to resume in-person learning as a blanket policy, rather than understanding that each school faces different challenges and must respond accordingly, he said.

The decision by the ICE adds yet another challenge to schools across the country who are already seeking the best path forward while considering the continued spread of the coronavirus across the nation, to now worrying about students who may face deportation, he said.

Congressman Adam Smith said that international students contribute to the US and its economy and many can't go home due to COVID19.

The federal guidance from the ICE to force these students to leave the country, risking their health, hard work and education, runs counter to American values, he said.