House will move to impeach Trump if he doesn't resign 'immediately', says Pelosi 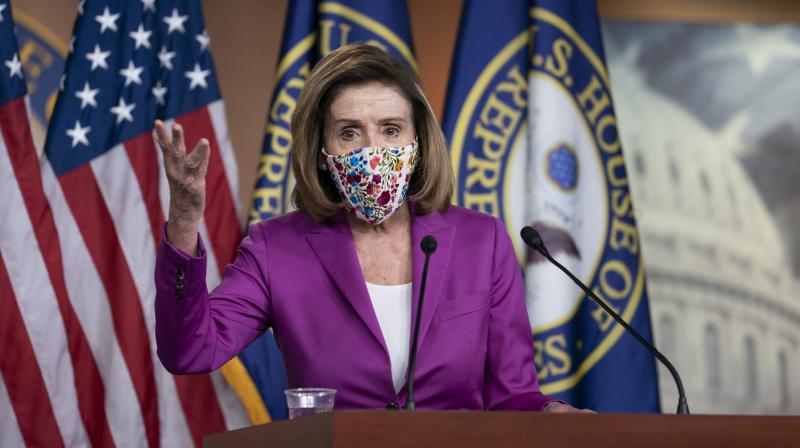 Speaker of the House Nancy Pelosi, D-Calif., holds a news conference on the day after violent protesters loyal to President Donald Trump stormed the U.S. Congress, at the Capitol in Washington, Thursday, January. 7, 2021. (AP/J. Scott Applewhite)

Washington: US House of Representatives Speaker Nancy Pelosi has said the House would move ahead with the process to impeach President Donald Trump for encouraging a mob that stormed the Capitol if he did not resign "immediately".

Trump, who lost the November 3 elections, would be succeeded by Joe Biden on January 20 as mandated by the Constitution. However, Pelosi and the Democrats believe that in the aftermath of the incident of his supporters storming the Capitol on Wednesday, he should be removed from office immediately.

"It is the hope of members that the President will immediately resign. But if he does not, I have instructed the Rules Committee to be prepared to move forward with Congressman Jamie Raskin's 25th Amendment legislation and a motion for impeachment," Pelosi said in a statement on Friday.

"Accordingly, the House will preserve every option  including the 25th Amendment, a motion to impeach or a privileged resolution for impeachment, she said after the House Democratic Caucus had an hours-long discussion on the issue.

Congressman Kaiali'i Kahele said he fully support removing Trump from office, either by invoking the 25th Amendment or bringing forth articles of impeachment against him.

"We cannot have a sitting president in office who incites violence among the people, or who tries to upend the American people's democratic process and right to a just election...his remarks in front of an agitated mob of his supporters that roused civil indignancy at the grounds of the US Capitol are unforgivable," he said.

Every day Trump remains in the White House is another day America is unsafe, Kahele said.

Kahele is a co-sponsor of two resolutions of impeachment authored by fellow US members of Congress -- one sponsored by Representatives David Cicilline, Ted Lieu, and Jamie Raskin; and the other by Congresswoman Ilhan Omar.

The resolution by Cicilline, Lieu and Raskin offers a single article of impeachment of abuse of power that covers both inciting violence against the US as well as Trump's urging of Georgia's Secretary of State to find votes.

Omar's resolution contains two articles of impeachment -- Trump's abuse of power and unlawful attempts to overturn the November 2020 presidential election; and his abuse of power to incite violence and orchestrate a coup against the country.

Congressman Gregory Meeks, Chairman of the House Committee on Foreign Affairs, led Democratic members of the Committee in calling for the impeachment of Trump for instigating the attack on the Capitol.

In a letter to Speaker Pelosi, the lawmakers underscored that the president's actions have already emboldened demagogues around the world and holding him accountable is critical to help restore US global leadership on democracy and the rule of law.

"There is a foreign policy imperative to hold the President accountable for his actions  we must demonstrate to the world that no one in America is above the law...the Constitution demands that we, as members of the House of Representatives, use every tool at our disposal to safeguard our country and our democracy during this perilous time by holding to account those who would do them harm. That tool is impeachment," the members wrote.

Congressman Adam Schiff alleged that by inciting the act of insurrection, Trump has committed his worst offence against the country and Constitution to date.

"The danger of him continuing to abuse his power will go up, not down, in the time remaining in his term. To protect the country from any further harm, he must leave office, immediately. The best course would be for him to resign...Failing that, the Vice President and Cabinet should invoke the 25th Amendment and remove him from any further performance of his duties, he said.

House Majority Leader Steny Hoyer also demanded that Trump be removed from office. "The Twenty-Fifth Amendment would be the quickest way to proceed, but Congress should consider impeachment if that Amendment is not invoked, he said.