About 20 survivors attended the event at a grassy spot overlooking the harbour and the USS Arizona Memorial. 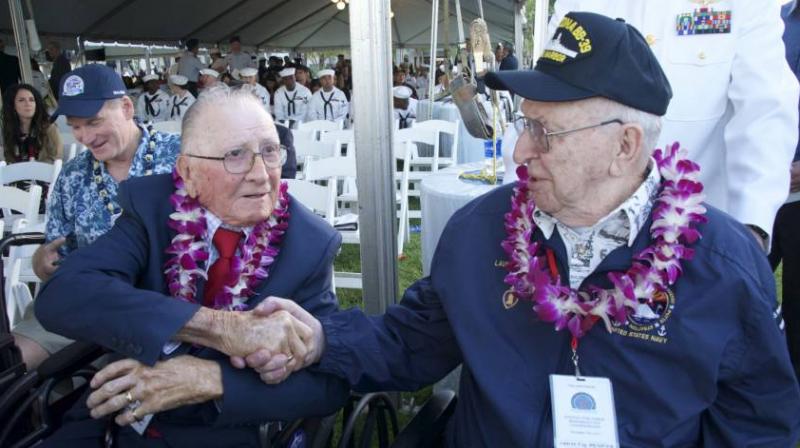 The ceremony began with a moment of silence at 7:55 a.m. in honour of those who lost their lives the same time the attack began. (Photo: AP)

Honolulu: Survivors gathered at the site of the Japanese attack on Pearl Harbor to remember fellow servicemen killed in the early morning raid 76 years ago, paying homage to the thousands who died with a solemn ceremony marking the surprise bombing raid that plunged the US into World War II.

About 20 survivors attended the event at a grassy spot overlooking the harbour and the USS Arizona Memorial. They were joined by about 2,000 Navy sailors, officials and members of the public.

Gilbert Meyer, who lived through the December 7, 1941 bombing, said he returned to pay his respects to his shipmates from the USS Utah and say a prayer for them.

The 94-year who lives near Lytle, Texas, was an 18-year-old fireman first class when a torpedo hit the port side of the Utah. He said he's still alive because he happened to be on the ship's starboard side.

"I think about my shipmates and how they were killed. It reminds me that we're lucky we got off and we've made a good country for them," Meyer said.

Meyer later served in the battles at Attu, Kiska, Iwo Jima and Okinawa. He witnessed Japan's surrender in 1945 from the deck of the USS Detroit in Tokyo Bay.

Then a fighter plane with Japan's World War II Rising Sun insignia strafed the Camp Makaole base where Elfring, 19 at the time, was serving. The bullets missed him by about 15 feet.

"When I looked up and saw the red ball on the fuselage I knew it wasn't our plane," he said. "I knew it was a Japanese plane."

The Jackson, Michigan man is now 95 and said returning to Pearl Harbor for the anniversary of the attack makes him feel special because he's one of the few remaining survivors.

"I have one of those caps that says 'Pearl Harbor Survivor' on it," he said. "It's amazing how many people come up and thank me for my service."

Elfring was in the military for the entire war, serving in Fiji, the Solomon Islands and the Philippines. When it ended, he went to the University of Michigan on the GI Bill, worked for a gas and electric company and raised family of five.

The ceremony began with a moment of silence at 7:55 a.m. in honour of those who lost their lives the same time the attack began.