The Royal Canadian Mounted Police said the bodies had been found in dense brush in the central province of Manitoba. 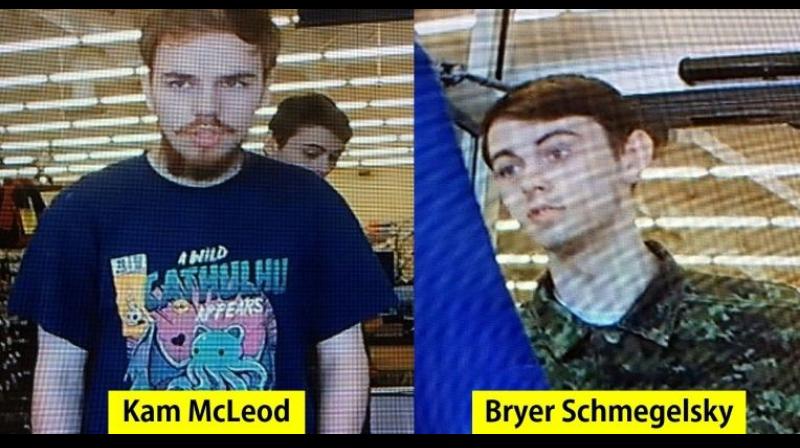 Kam McLeod, 19, and Bryer Schmegelsky, 18, were wanted over the murders of an Australian man and his American girlfriend, as well as of a Canadian university professor. (Photo: AFP)

Kam McLeod, 19, and Bryer Schmegelsky, 18, were wanted over the murders of an Australian man and his American girlfriend, as well as of a Canadian university professor.

Initially, the pair were reported missing themselves after their car was found torched in British Columbia -- but police then discovered the third body, and the Vancouver teens were named as formal suspects.

"The manhunt in Manitoba is over," Public Safety Minister Ralph Goodale said on Twitter, seemingly eliminating any doubt that the fugitives had been found.

The Royal Canadian Mounted Police said the bodies had been found in dense brush in the central province of Manitoba.

Late last week, police had found items linked to the suspects on the shores of the Nelson River. They also found a battered aluminum boat.

The bodies were discovered within a kilometer (1,100 yards) of where the items were found, and eight kilometers from the spot where their burned-out vehicle was discovered on July 22.

"At this time, we are confident that these are the bodies of the two suspects wanted in connection with the homicides in British Columbia," RCMP spokeswoman Jane MacLatchy told a news conference.

"An autopsy is being scheduled in Winnipeg to confirm their identities and to determine their cause of death."

The pair were wanted over the murders of Australian Lucas Fowler, 23, and American Chynna Deese, 24, who were discovered shot to death on July 15 along a highway in British Columbia.

Fowler had been living in British Columbia, local media reported, but the pair had been traveling extensively. Deese's family told US media that the couple had embarked on a road trip through Canada.

Authorities then found the body of 64-year-old Leonard Dyck, a botany professor at the University of British Columbia, on July 19.

"It's going to be extremely difficult for us to ascertain definitively what the motive was," RCMP Assistant Commissioner Kevin Hackett told reporters.

"Obviously, we will not have the opportunity to speak with these individuals," he said, adding that he hoped examining the area where the bodies were found might provide some clues as to motive.

The teens led police on a more than 3,000-kilometer (1,860-mile) chase halfway across the vast country to Manitoba province, where they ended up in the area near the village of Gillam.

"This is like traveling from London to Moscow, to put things in perspective," said Hackett.

Police deployed tracker dogs, a drone and search planes equipped with infrared cameras to comb the difficult, forested and swampy terrain, which was infested with mosquitos and home to bears and wolves.

"There is obviously a certain amount of relief that we were able to locate these people," MacLatchy told reporters.

Experts said McLeod and Schmegelsky, who were childhood friends, would have struggled to survive over the long term.

In an interview last month with the Canadian Press as the manhunt ramped up, Schmegelsky's father said his son was deeply troubled and had never recovered from his parents' divorce in 2005.