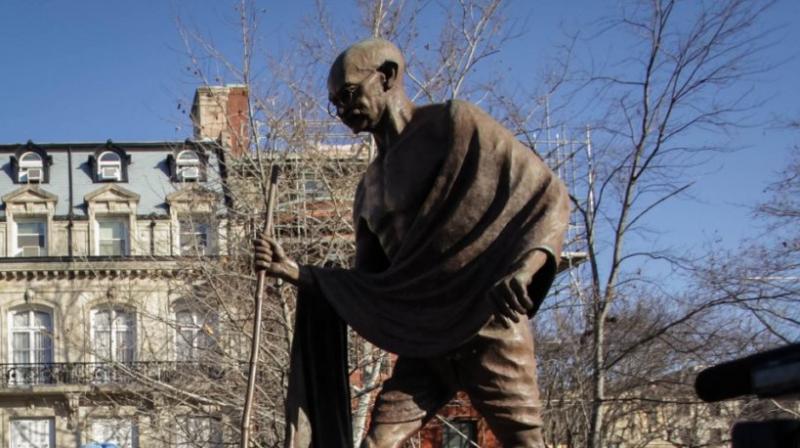 Washington: A university in California in the US has ruled out removing a statue of Mahatma Gandhi after an online petition demanded that it be removed in solidarity of the Black Lives Matter movement.

An Indian-origin student from the California State University in Fresno launched an online petition in the aftermath of the custodial death of African-American George Floyd in Minneapolis on May 25.

His death resulted in a nationwide protest, which at times turned violent resulting in damaging of national monuments and several statues including that of Mahatma Gandhi in Washington DC.

"This transcendent quality is what the garden memorializes. It does not necessarily honour every facet of their lives," he said in a statement.

"We applaud those who call for a clear-eyed look at history and the individuals who shaped it. We also urge everyone to consider carefully the overall significance of each individual's lasting contribution to a just and fair society," he said.

"On that basis, we believe those we honour in the Fresno State Peace Garden occupy an important place in history and should continue to guide us in promoting courage, social justice and tireless efforts to make the world a better place," Castro said in response to the petition.

The online petition, launched by university student Akhnoor Sidhu, demanded the removal of Gandhi status in solidarity of the Black Lives Matter movement.

However, Fresno alumni launched a counter-petition against the removal of the statue.

"As a former Fresno State student thirty years ago, I was there when the Peace Garden was created and the busts of those who had become international symbols of civil rights, non-violent resistance and peaceful change were put in place," David Richardson said.

"At that time, I could not have fathomed that one day the garden which was begun in a spirit of hope and optimism for the future and respect for the lessons of the past would, one day, be under attack by a movement which has so far shown neither of those qualities," he said.