Both exchange greetings ahead of the 75th anniversary of Nazi defeat in WWII, emphasizing on the "histroic alliance" between the countries 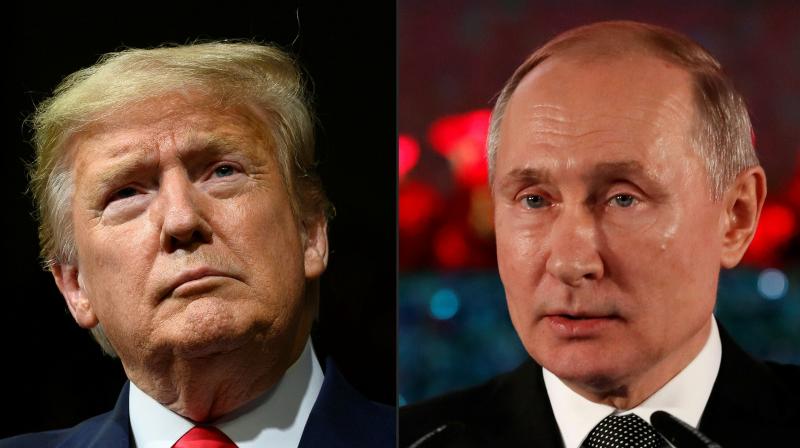 Moscow: US President Donald Trump and Russian President Vladimir Putin discussed progress in combating the coronavirus pandemic along with arms control issues and oil prices in a phone call Thursday, the White House and the Kremlin said.

The White House said Trump spoke with Putin “to commemorate and reflect upon the 75th anniversary of Victory in Europe Day.”

The Kremlin noted in its readout of the call that the two leaders exchanged greetings ahead of the 75th anniversary of the Nazi defeat in World War II, emphasizing “the historic significance of the WWII alliance between our peoples that allowed (us) to defeat the common enemy.”

It said that if Russia and the U.S. follow the spirit of their wartime alliance they could score successes in dealing with such issues as ensuring strategic stability, fighting terrorism, settling regional conflicts and combating epidemics.

The White House said the two leaders discussed “progress on defeating the coronavirus pandemic,” with Trump reiterating that “the United States is working hard to care for Americans at home and is also ready to provide assistance to any country in need, including Russia.”

Trump said that in the phone call “I suggested if they need ventilators, we’d love to send them some. At the appropriate time we’ll do that.”

The Kremlin didn’t say if Putin accepted the U.S. offer, but it said in the past that Russia would be grateful to the U.S. if it proposed assistance.

Russian authorities made it a top priority to secure ventilators, but it remained unclear how many of the machines the country has now and whether the number is sufficient.

Russia sent a batch of medical supplies to the U.S. last month.

On arms control, “Trump reaffirmed that the United States is committed to effective arms control that includes not only Russia, but also China, and looks forward to future discussions to avoid a costly arms race,” the White House said.

The only U.S.-Russian nuclear arms control agreement still standing is the New START treaty, signed in 2010 by the presidents of the day, Barack Obama and Dmitry Medvedev. The pact limits each country to no more than 1,550 deployed nuclear warheads and 700 deployed missiles and bombers, and envisages sweeping on-site inspections to verify compliance.

Russia has offered to extend the New START that expires in February 2021, while the Trump administration has pushed for a new arms control pact that would also include China. Moscow has described that idea as unfeasible, pointing at Beijing’s refusal to negotiate any deal that would reduce its much smaller nuclear arsenal.

The Kremlin said that Trump and Putin also discussed the situation in the global oil market. It noted the positive effect of the OPEC+ agreement reached thanks to coordinated efforts by the U.S. and Russian presidents that helped stabilize oil prices.