Pentagon to send 300 Marines to Afghanistan

The Marines were among the first US forces sent to Afghanistan after the 2001 terror attacks in the USA. 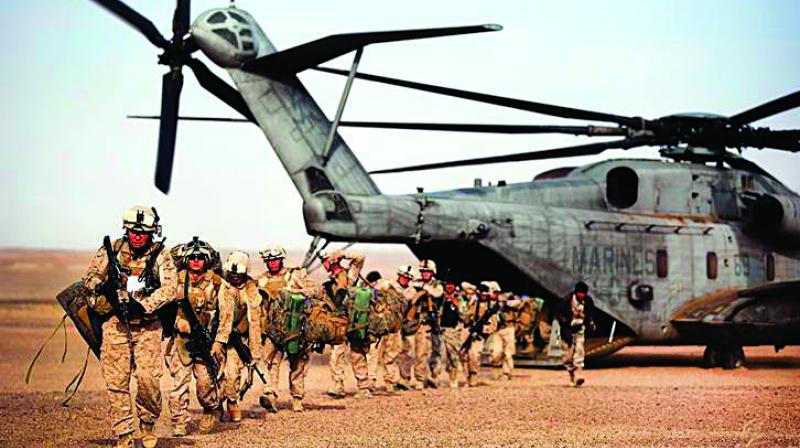 The Marines will be deployed in Afghanistan’s Helmand province to help a NATO-led mission train Afghan forces.

Washington: Some 300 US Marines will head to Helmand province in Afghanistan this spring to help a NATO-led mission to train Afghan forces, the Marines said on Friday.

The move puts Marines back in Helmand, who left in 2014 as NATO withdrew its forces and let Afghan troops lead the fight against the Taliban.

They were among the first US forces sent to Afghanistan after the 2001 terror attacks in the United States. Several thousand were deployed in Helmand, an opium-producing region, where they engaged in a bitter combat with the Taliban insurgency.

The administration of outgoing President Barack Obama had hoped to withdraw most US military forces from Afghanistan by now, leaving behind just a small force.

But the United States still has some 8,400 military personnel in the country, and is now returning the Marines to Helmand.

At the request of US Central Command (CENTCOM) and the US forces in Afghanistan, “approximately 300 Marines will be deployed to Helmand Province Afghanistan in Spring 2017 in support of the NATO-led Resolute Support mission,” a statement from the Marine Corps said.

The Marines “will train and advise key leaders within the Afghan National Army 215th Corps and the 505th Zone National Police,” it added.

“Advising and assisting Afghan defence and security forces will assist in preserving gains made together with the Afghans,” it added. The Afghan Army and the police are struggling in their fight against a resurgent Taliban.

In  December General John Nicholson, the chief US and NATO commander in Afghanistan, said Kabul directly controls about 64 per cent of the country’s population of 30 million, down slightly from 68 per cent earlier in 2016.

He said the Taliban have been especially active in Helmand province and are working opium with traffickers.

Tags: us marines, us and afghanistan