Sherin’s father turned off location, went shopping before dumping her body with bag of trash

Authorities in Dallas are still waiting on scientific testing to come back, including the autopsy. 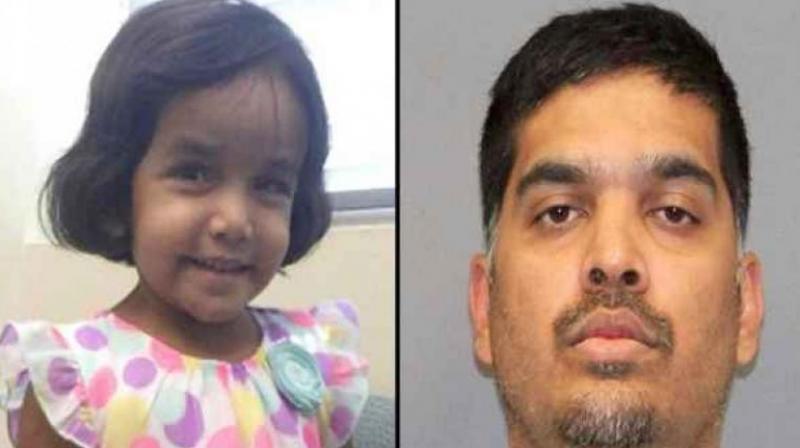 ‘He put Sherin in the back of the car with a sack of trash and went to a shopping centre nearby,’ Detective Farmer was quoted as saying. (Photo: File)

Houston: Police in Dallas have shared new details about the mysterious death of Indian toddler Sherin Mathews, alleging that her Indian-American foster father bundled her “stiff and cold” body in the back of his car with a bag of trash and hid her corpse in a culvert.

Three-year-old Sherin was found dead in the culvert about one kilometre from her home in suburban Dallas on October 22 by a cadaver dog during a massive search for the missing toddler.

Wesley Mathews, the adoptive father initially told police that Sherin disappeared overnight after he ordered her to stand outside their home at about 3 am on October 7 for not drinking her milk. When he returned to the spot, Wesley said she had disappeared.

After Sherin’s body was discovered after a search that lasted over two weeks, he changed his story and told police that she died after choking while he was forcing her to drink her milk.

Authorities in Dallas are still waiting on scientific testing to come back, including the autopsy.

New details surrounding Sherin’s death emerged on Tuesday during the custody hearing of Wesley and Sini Mathews’ three- year-old biological daughter, who was taken away by US Child Protection Services after Sherin’s disappearance.

Richardson police detective Jules Farmer testified that Wesley, 37, told them that Sherin died choking on milk that he forced her to drink.

Farmer said Wesley was forcing her to drink milk from a bottle while she was in the garage and he said that she was standing up when she choked.

The detective said he questioned Wesley how she could choke while standing up. Wesley then told the detective that Sherin stopped breathing, but he never called emergency number 911 or summoned his wife Sini, who is a nurse, for help.

He admitted to moving her body from the home.

He reportedly turned off the location tracking on his phone when he is believed to have taken Sherin’s body to the culvert.

Farmer also said Sherin’s body was “stiff and cold” when Wesley decided to dispose of the body.

“He put Sherin in the back of the car with a sack of trash and went to a shopping centre nearby,” Farmer was quoted as saying by fox4news.com.

“Went to a shopping centre where he disposed of the trash, and then drove around a little more until he put Sherin in the culvert where we found her body,” he said.

Dr Suzanne Dakil of Referral and Evaluation of At Risk Children Clinic, testified last Wednesday during a custody hearing that Sherin had broken bones and injuries in various stages of healing.

Dakil told the court that after looking at X-rays, she determined that Sherin’s legs were fractured. Sini told Dakil that Sherin had brittle bones as a result of the poor diet she had in India. However, the doctor determined that the injuries had occurred after she arrived in the US.

Wesley has been charged with felony injury to a child and her mother, Sini, 35, was arrested later and charged with child endangerment.

Both Sini and Wesley attended Wednesday’s hearing, but they remain in detention at the Dallas County Jail.

Wednesday, a judge denied access to both Wesley and Sini to their biological daughter, now living with relatives in Houston, saying they were not fit to be parents due to what happened to their adopted daughter, Sherin.