More than 600,000 members of the minority Muslim group have fled across the border into Bangladesh since then. 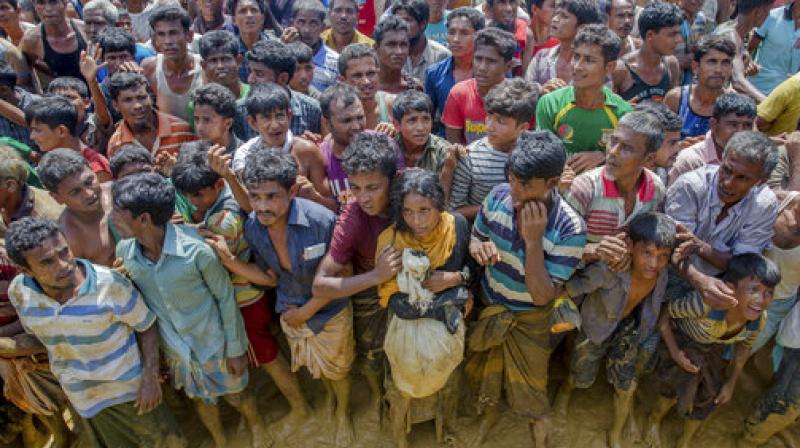 The House passed a resolution on Tuesday urging immediate restoration of humanitarian access to the Rakhine state where unrest has forced over 600,000 Rohingya Muslims to flee to Bangladesh. (Photo: AP)

Washington: The US House of Representatives has condemned the “ethnic cleansing” of Rohingya Muslims and called on Myanmars leadership to end attacks on minorities in the Rakhine state, in the stiffest congressional criticism of the government in the Buddhist-majority country.

The House passed a resolution on Tuesday urging immediate restoration of humanitarian access to the Rakhine state where unrest has forced over 600,000 Rohingya Muslims to flee to Bangladesh.

“This slaughter must end, and our resolution ought to send a strong message to Burmese leaders that their commitment to restoring democracy will be judged by their respect for the individual rights and freedoms of all people living within Burmas borders, no matter their faith or ethnicity,” House Democratic Whip Steny H Hoyer said in a statement.

Introduced by Congressmen Joe Crowley and Eliot Engel, the resolution condemns the “horrific actions” of the military and security forces and calls for an immediate cessation of violence.

The resolution also urges the restoration of humanitarian access to the restive Rakhine state where unrest has forced hundreds of thousands of Rohingya Muslims to flee to Bangladesh.

“It also calls for Aung San Suu Kyi (Myanmars de facto leader) to exercise moral leadership, something thats needed now more than ever,” Engel said in his remarks on the House floor yesterday.

“We reject the Armys claims that whats taking place in Burma is a so-called counterterrorism measure ? thats nonsense. Its a textbook ethnic cleansing, thats what it is,” Engel said.

“We should also encourage other governments to stay engaged and continue to address the pressing needs of these refugees needs that will only grow as long as this situation remains unresolved,” he said. Clashes erupted after the August 25 deadly attacks by militants on security forces in the Rakhine State.

More than 600,000 members of the minority Muslim group have fled across the border into Bangladesh since then.