Jair Bolsonaro could take two months to fully recover and will spend at least a week in the hospital. 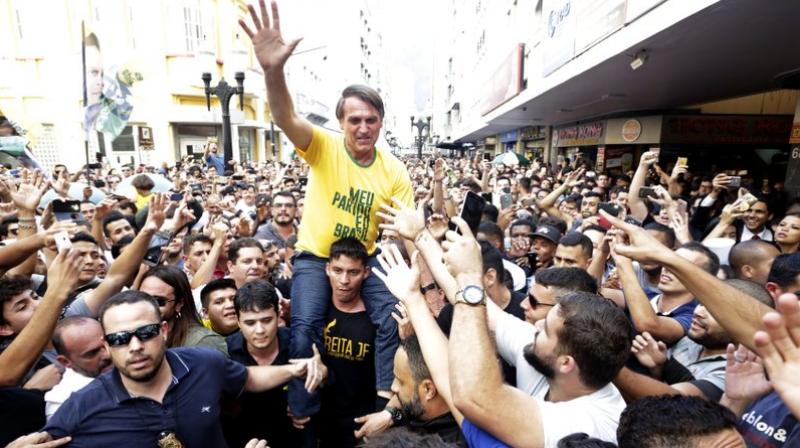 Presidential candidate Jair Bolsonaro is taken on the shoulders of a supporter moments before being stabbed during a campaign rally in Juiz de Fora, Brazil. (Photo: AP)

Juiz de Fora: The leading candidate in Brazil's presidential election is in serious but stable condition after being stabbed by an assailant at a campaign rally on Thursday, doctors said, pushing an already chaotic campaign into further disarray.

Far-right firebrand Congressman Jair Bolsonaro, a controversial figure who has enraged many Brazilians for years with divisive comments, but has a devout following among conservative voters, could take two months to fully recover and will spend at least a week in the hospital, said Dr. Luiz Henrique Borsato, who operated on the candidate.

"His internal wounds were grave and put the patient's life at risk," Borsato said, adding that a serious challenge now would be preventing an infection that could be caused by the perforation of Bolsonaro's intestines.

The attack on Bolsonaro, 63, is a dramatic twist in what was already Brazil's most unpredictable election since the country's return to democracy three decades ago. Corruption investigations have jailed scores of powerful businessmen and politicians in recent years, and alienated infuriated voters.

There were fears that violence could flare across Brazil on Friday, as the nation celebrates its Independence Day and political groups are expected to march in hundreds of cities. Bolsonaro's rival candidates called off their campaign activities for Friday.

Under Brazilian campaign laws, Bolsonaro's tiny coalition has almost no campaign time on government-regulated candidate ad blocs on TV and radio. That means he relies deeply on social media and raucous rallies around the country to drum up support. If Bolsonaro is not able to go out in the streets, it could jeopardize his campaign.

Bolsonaro, a retired Army captain, is running as the law-and-order candidate and positioned himself as the anti-politician despite having spent nearly three decades in Congress where he has managed to author just a few laws.

He has long espoused taking a radical stance on public security in Brazil, which according to United Nations statistics has more homicides than any other country.

Bolsonaro, whose trademark pose at rallies is a "guns up" gesture with both hands to make them resemble pistols, says he would encourage police to kill suspected drug gang members and other armed criminals with abandon.

He has openly praised Brazil's military dictatorship and in the past said it should have killed more people.

In casting his vote on the floor of Congress for the 2016 impeachment of former President Dilma Rousseff, he dedicated his ballot to the military regime figure who oversaw the prison where Rousseff was jailed for three years and brutally tortured.

Bolsonaro faces trial before the Supreme Court for speech that prosecutors said incited hate and rape. He has called the charges politically motivated.

Political violence is rampant in Brazil at the local level.

For instance, in the months before 2016 city council elections in Baixada Fluminense, a hardscrabble region the size of Denmark that surrounds Rio de Janeiro, at least 13 politicians or candidates were murdered before ballots were cast.

Earlier this year, Marielle Franco, a Rio city councilwoman who was an outspoken critic of police violence against slum residents, was assassinated.

But violence against national political figures, even in the extremely heated political climate that has engulfed Brazil in recent years, is rare.

The Federal Police said in a statement that it had officers escorting Bolsonaro at the time of the knife attack and the "aggressor" was caught in the act. It said the circumstances were being investigated.

Local police in Juiz de Fora confirmed to Reuters that the suspect, Adelio Bispo de Oliveira, 40, was in custody and that he appeared to be mentally disturbed.

Oliveira was affiliated with the leftwing Socialism and Liberty Party from 2007 to 2014, the party said in a written statement, in which it repudiated the violence.

Police video taken at a precinct and aired by TV Globo showed Oliveira telling police that he had been ordered by God to carry out the attack.

"We do not know if it was politically motivated," said Corporal Vitor Albuquerque, a spokesman for the local police.

TV images showed Bolsonaro being carried on someone's shoulders in the middle of a crushing crowd of cheering supporters on one of the city's main streets when a knife was seen raised above heads just before it plunged into the candidate's body.

The pictures show Bolsonaro screaming in pain, then falling backward into the arms of those around him. It took a few moments for the crowd to realize what occurred, but they quickly rushed the candidate out of the street.

A few people gathered outside the hospital where Bolsonaro was treated Thursday night where the scene was calm.

Bruno Engler, 21, who is running for a Minas Gerais state congressional seat for Bolsonaro's Social Liberal Party, was pacing outside the hospital with a few other Bolsonaro supporters. He said if he could, he would lynch the suspect police have in custody.

"They call us on the right the intolerant, the violent ones, but those who are intolerant and violent are them," Engler said, referring to leftist voters.

Bolsonaro's rivals in the race expressed outrage at the attack.

Fernando Haddad, who will likely be the leftist Workers Party presidential candidate, said the stabbing was a "shame" and a "horror."