Trump has been walking a difficult line since the massacres of 31 people over the weekend. 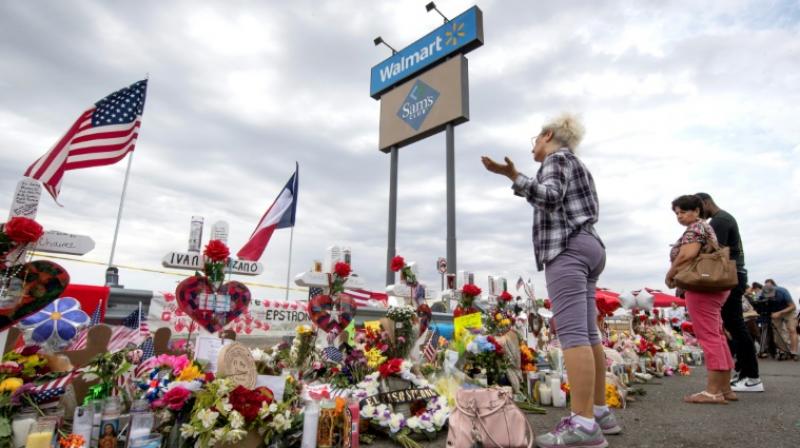 Protesters are expected to turn out in both places, even if the president is likely to be shielded from even witnessing dissent. (Photo: AFP)

Texas: President Donald Trump is flying Wednesday to the sites of mass shootings in Ohio and Texas, but the divisive Republican risks meeting protests by Americans who blame him for stoking the violence.

Trump has been walking a difficult line since the massacres of 31 people over the weekend -- 22 at a Walmart frequented by large numbers of Hispanic people in El Paso, Texas, and nine killed by a second gunman in Dayton, Ohio.

But as a politician constantly warning over what he calls an "invasion" of illegal immigrants, Trump finds himself accused by opponents of inspiring the El Paso gunman's anti-immigrant hatred and the country's volatile atmosphere in general.

Protesters are expected to turn out in both places, even if the president is likely to be shielded from even witnessing dissent.

At the first stop, Dayton's Democratic mayor Nan Whaley bluntly promised to give Trump a piece of her mind, telling him "how unhelpful he's being."

"The people should stand up and say they are not happy," she told journalists Tuesday.

"From my perspective, he is not welcome here. He should not come here," Escobar said Tuesday on MSNBC.

Even the city's Republican mayor offered only a grudging welcome, stressing icily that he would greet Trump in his "official capacity."

Trump has been infuriated by accusations that his administration is deliberately dividing the United States along long-festering racial lines.

"I am the least racist person. Black, Hispanic and Asian Unemployment is the lowest (BEST) in the history of the United States!" he tweeted Tuesday.

But his campaign speeches and tweets repeatedly invoke the idea that the southern border is under "invasion." As recently as May, the president laughed and made a quip when a supporter at one of his rallies yelled that they should "shoot" illegal immigrants.

Trump has also railed crudely against a string of Democratic opponents of color.

The 21-year-old El Paso killer, who was captured alive, appeared to be closely inspired by similar sentiments. He released a manifesto declaring "this attack is a response to the Hispanic invasion of Texas."

The motives of the Dayton murderer, who was 24 and was shot dead by police at the scene of the crime, were less clear. He reportedly had a history of violently misogynistic attitudes.

Where Trump and his mostly leftist opponents agree is on the unambiguous designation of the two events as terrorism.

Massacres by mostly lone gunmen are all but routine in the United States, where guns are easy to obtain legally and mass killings have taken on a sort of cult status in some extreme circles.

Hardline defenders of gun ownership have long resisted portrayal of such tragedies as anything more than random, localized events.

But Trump came out Monday in a White House speech condemning "racism, bigotry and white supremacy" as "sinister ideologies."

"We have asked the FBI to identify all further resources they need to investigate and disrupt hate crimes and domestic terrorism," he said.

The strong words rang hollow, however, for many who noted that Trump's entire political career -- taking him straight from TV entertainer to president in 2016 -- has been built on campaigns laced with racially charged images and themes.

Trump also proposed several measures he said would tackle the roots of the gun violence epidemic, including backing for "red flag" laws allowing authorities to intervene when a gun owner shows obvious signs of posing a danger.

Yet again, he disappointed vast numbers of Americans backing far tougher action, such as strict background checks for gun buyers in the first place.