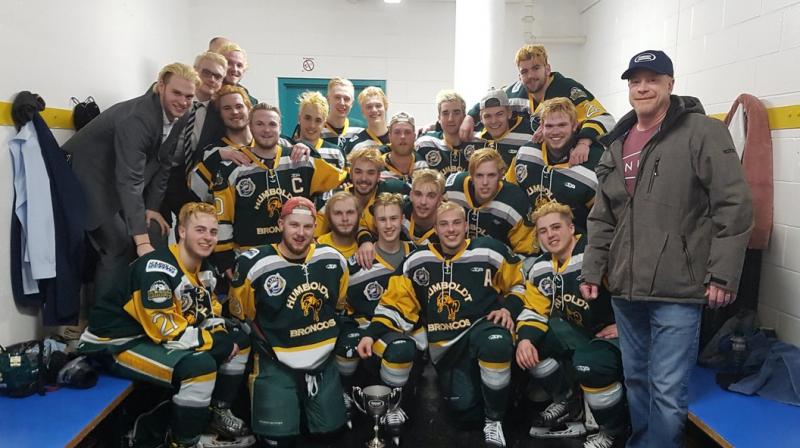 ‘Our Broncos family is in shock as we try to come to grips with our incredible loss,’ Broncos team president Kevin Garinger said in a statement. The team comprises 24 players, all from Canada, with the youngest aged 16 and the oldest 21. (Photo: Twitter/ @HumboldtBroncos)

The bus was carrying 28 people including the driver.

Police said the crash took place at around 5:00 pm about 28 kilometers (18 miles) north of the town of Tisdale, a trading center in an overwhelmingly agricultural region.

The team was heading north for a Saskatchewan Junior Hockey League playoff game against the Nipawin Hawks.

The Saskatchewan league is a feeder system for higher levels of hockey with many graduating to play at US and Canadian colleges and major junior league level, while some go on to the National Hockey League.

"It is a significant accident, we had a tractor trailer and a bus collide," Royal Canadian Mounted Police inspector Ted Monro told a press conference, declining to give details about the victims.

The condition of the truck's driver is unknown.

The Saskatchewan Health Authority said on Twitter it was dealing with a "high volume of incoming trauma cases" at Royal University Hospital and St Paul's Hospital, both located in Saskatoon some 250 kilometers (150 miles) away from the crash site.

Victims' families were directed to Nipawin Apostolic Church for information and support.

"Our Broncos family is in shock as we try to come to grips with our incredible loss," Broncos team president Kevin Garinger said in a statement.

The team comprises 24 players, all from Canada, with the youngest aged 16 and the oldest 21.

"It's a horrible accident, my God," Darren Opp, president of the Nipawin Hawks hockey team, told the Globe and Mail. "It's very, very bad.

"There's uncles and moms and dads waiting to hear whether their sons and nephews are OK."

In a statement, Hockey Canada said was "devastated" by the news.

"Our hockey community is a tight-knit family. We will come together in support of each other in the days ahead, as we mourn those lives lost, remember the injured and support those whose lives are forever changed by this tragedy," it added.

In a country where ice hockey is a national sport, news of the crash sparked an outpouring of grief on social media, with fans and players alike sharing messages of condolences using the hashtag #PrayforHumboldt.

Canada Prime Minister Justin Trudeau tweeted saying "I cannot imagine what these parents are going through, and my heart goes out to everyone affected by this terrible tragedy, in the Humboldt community and beyond."

"It's a place where players can forget what happens on the ice. 2night my heart is in Humboldt."

An online fundraising page set up by a woman listed on social media as a Humboldt resident raised nearly USD 40,000 in a matter of hours.

The fatal smash brought back memories of a single vehicle bus crash in December 1986, also in Saskatchewan that killed four members of the Western Hockey League Swift Current Broncos.

"Humboldt Broncos weighing heavy in our hearts and minds tonight," the team said on Twitter.