Gandhi was racist: African student body in Canada demands statue be taken down

‘He utilised anti-Black racism as a weapon to bargain with the British about the subjugation of Indians living in South Africa’. 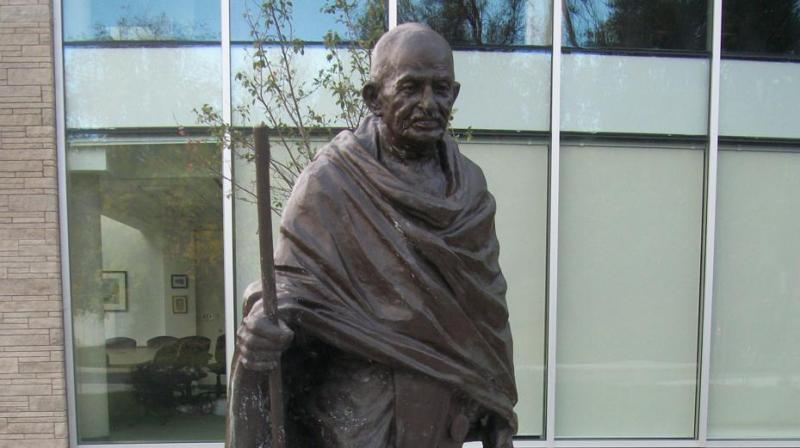 Spearheaded by Kenneth Aliu, president of the Institute of African Studies Student Association the campaign sparked off following Aliu’s opinion piece wherein he accuses Gandhi of racism and being ‘anti-black’. (Photo: Gandhiji.ca)

Almost a month after the destruction of Lenin’s statue in Tripura while the country still reels under continual instances of vandalism, a similar outcry seems to have taken root in Canada.

Spearheaded by Kenneth Aliu, president of the Institute of African Studies Student Association (IASSA) the campaign sparked off following Aliu’s opinion piece on an independent daily, Charlatan wherein he accuses Gandhi of racism and being ‘anti-black’, the Hindustan Times reported.

Aliu said in a radio interview that he began pursuing the issue after learning about the protests in the University of Ghana in 2016, following the unveiling of a Gandhi statue.

In his opinion piece Aliu writes, “It is insufficient to state the obvious about Gandhi without questioning the legacy of the man we have collectively placed on a moral pedestal”.

“Gandhi was a racist. He utilised anti-Black racism as a weapon to bargain with the British about the subjugation of Indians living in South Africa,” he said.

“He was known to explicitly refer to Black South Africans as ‘Kaffir’, a derogatory term on the same level as the N-word. In his 20 years in South Africa, Gandhi’s racism towards black peoples was made clear.”

“The removal of the statue is one way of correcting that history and rethinking the narratives we tell - especially in an institution responsible for creating critical thinkers,” he added.

Gandhi’s statue, which was donated to the university by the Indian government found place on campus after Ottawa-based Mahatma Gandhi Peace Council( MGPC) -- an organization proselytizing Gandhi’s teachings -- led an initiative.

The university’s administration, which appears unlikely to accept the student body’s demands did not respond to HT’s request for comment. However, MGPC president Rashmi Gupta claims that they have assured by the university president that ‘the statue will remain’.

“Dr (Alistair) Summerlee, president of the university, reassured MGPC, observing that if he was asked about this issue, he will be convincing in his defence of an individual who meant a great deal to India, Indians and to global citizens. Gandhiji, according to him, was a greatly revered and respected figure and that the president and the board had the final say in any moves to remove statues or memorabilia to any individual on campus and this would not be a direction that the university will pursue,” she told HT in an emailed response.

Gupta responded to Aliu’s allegations by saying that Gandhi’s remarks had been made “way back” adding that his comments came ‘before he became Mahatma’.