The coalition opposing the billboards wrote to NYC Mayor Bill de Blasio, asking him to stand against the planned Times Square display 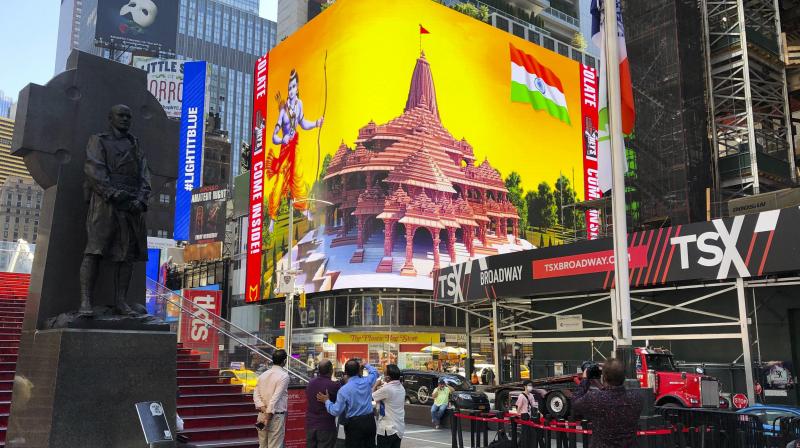 Imagery of the Hindu deity Ram and 3-D portraits of the proposed Hindu temple are displayed on a digital billboard in Times Square. (AP)

New York: A large digital billboard in Times Square is displaying images of a Hindu deity and a temple being built on disputed ground in India, despite calls from a coalition of advocacy organizations - including Muslim, human rights, anti-fascist and secular groups - asking advertisers not to show the images.

Indian Prime Minister Narendra Modi participated in the groundbreaking for the Hindu temple Wednesday in the Indian city of Ayodhya. Modi supporters planned to gather in New York City's Times Square throughout the day to mark the occasion.

Around a dozen people stood in front of the billboard on Wednesday morning, snapping selfies when the bright yellow image of the multi-level, arched temple along with an image of the Hindu deity Ram and the Indian flag came across the screen.

The billboard wraps around the corner of 47th Street and Seventh Avenue and the website of the Times Square Alliance says it is owned by Clear Channel, which did not immediately return a request for comment.

Modi laid the first silver bricks at the Uttar Pradesh site of the planned temple, which will be built were the Babri Masjid mosque stood. The mosque was destroyed by Hindu hard-liners in 1992, sparking communal violence that left some 2,000 people dead.

Hindus believe Ram was born at the site and claim that the Mughal Emperor Babur built a mosque on top of a temple there.

The organizers of the celebration in Times Square bought the prime billboard space, Jagdish Sewhani told the Press Trust of India, which described him as the president of the American India Public Affairs Committee.

"We are just doing a celebration and it is not against anyone. This is a once in a mankind event and we thought what better place for it than Times Square," Sewhani told The Associated Press on Tuesday.

The American India Public Affairs Committee itself does not have a website, nor is a 1099 tax form available on ProPublica's nonprofit database. There is no corporation registered under that name in New York State.

When asked specifically for details about his organization, Sewhani described it as a "group of people'' concerned with U.S.-India relations and then said, "Let us focus on our Lord Ram.''

In an interview with the South Asian Insider Show, Sewhani described himself as one of the founders of a U.S. wing of the Bharatiya Janata Party, the Hindu nationalist ruling party of India - a secular nation since independence from Britain in 1947.

Wednesday's groundbreaking ceremony followed a ruling by India's Supreme Court last November favouring the building of a Hindu temple. The court also ordered that Muslims be given 5 acres (2 hectares) of land to build a mosque nearby. But the ruling disappointed Muslims, who comprise around 14% of India's 1.3 billion people.

The coalition opposing the billboards wrote to New York City Mayor Bill de Blasio, asking him to stand against the planned Times Square display, which they called Islamophobic and a symbol of violence against Muslims in India.

"It shows not only glamorizing and glorifying an evil and cruel act," Shaik Ubaid, president of Indian Minorities Advocacy Network, told the AP. ``They are so confident they are doing this in Times Square, the heart of America.''

The mayor's office did not return a request for comment.

The coalition also asked supporters to call major advertising companies to ask them not to run the images on their billboards. A representative of the company Branded Cities told the coalition Monday that they would not run digital advertising for the celebration in Times Square, Clarion India reported. Branded Cities didn't return an email from the AP.

Sewhani disputed that any of the planned billboard advertisements had been canceled.

In reaction to hearing that the display went forward, Ubaid said, ``This ad controversy gave us an opportunity to educate Americans and the world about what is happening in India and its losing its secular constitution."

Ubaid posted images on Twitter on Thursday of a truck hired by the Indian American Muslim Council displaying opposing panel ads, including one with a picture of the Babri Masjid that read: ``Once stood this beautiful mosque in India which was demolished by Hindu extremists." The truck was driving a few blocks from Times Square in the video.

The Indian American Muslim Council is part of a coalition that plans to demonstrate in Times Square on Wednesday evening against the Hindu supremacy movement, according to a press release on its website.

Zafaryab Jilani, who represents the All India Muslim Personal Law Board, previously said that while the Muslim community in India is not satisfied with the Supreme Court's ruling, it will respect the decision and not protest the building of the temple.

Several prominent Muslim writers, academics and activists, who didn't want to be identified, refused to discuss the issue, suggesting that the community in India was resigned to the new reality.