Trump tweeted that Pruitt's deputy, former coal lobbyist Andrew Wheeler, would take over Monday as acting head of the agency. 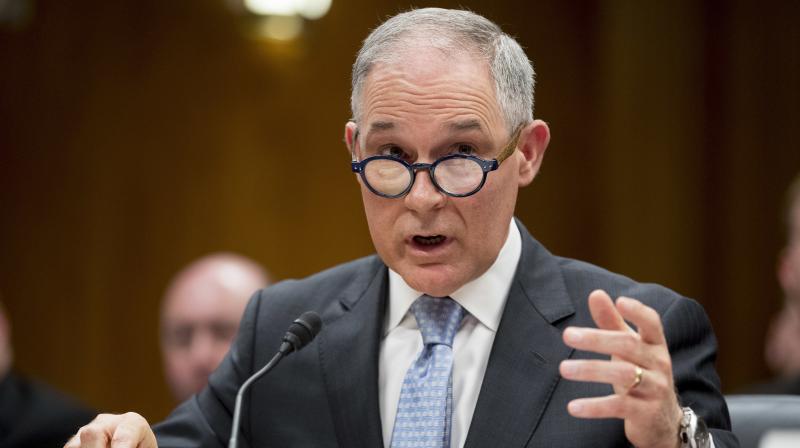 "He came to me and he said, 'I have such great confidence in the administration. I don't want to be a distraction.' And I think Scott felt that he was a distraction," said Trump. (Photo: AP)

Washington: US President Donald Trump on Thursday announced the departure of his environment chief, Scott Pruitt, who faced ever-growing ethics scandals over his spending and conduct in office.

"I have accepted the resignation of Scott Pruitt as the Administrator of the Environmental Protection Agency," tweeted the president, ending months of speculation about the future of the man he had tasked with dismantling former president Barack Obama's green legacy.

"Within the Agency Scott has done an outstanding job, and I will always be thankful to him for this," added Trump.

Trump told journalists aboard Air Force One that there was "no final straw" that led to Pruitt's departure, and that the move -- which he said had been in the works for "a couple of days" -- was "very much up to him."

"He came to me and he said, 'I have such great confidence in the administration. I don't want to be a distraction.' And I think Scott felt that he was a distraction," said Trump.

Trump tweeted that Pruitt's deputy, the former coal lobbyist Andrew Wheeler, would take over Monday as acting head of the agency.

"He is a very environmental person. He's a big believer, and he's going to do a fantastic job," the president told journalists of Wheeler.

Pruitt, a former Oklahoma attorney general reported to have close ties to fossil fuel industries, had become the focus of multiple investigations in recent months, including by his own agency's inspector general, two other independent federal agencies and by Congress itself.

The list of accusations levelled against the 50-year-old EPA chief had grown almost too long to itemize.

All the charges share a common thread: he appears to have used the position he has held since February 2017 to enrich his and his own family's lifestyle in violation of federal law, while punishing subordinates who raised objections to his behavior, or who failed to show sufficient loyalty to him.

It all began with a penchant for first-class and private air travel while on official business, a bill footed by the taxpayers, in contravention of usual government practice.

Then came reports of the large number of bodyguards he kept around him 24 hours a day, doubling the cost of his predecessors' security detail.

He also ordered the installation of a secure telephone cabin in his Washington office at the cost of USD 43,000, which critics found excessive.

And there was the question of his personal expenses. He rented an apartment linked to oil industry lobbyists in a pricey neighborhood of the capital for a mere USD 50 a night, a sum he only paid on nights he actually slept there.

He also tasked members of his staff with personal assignments, including finding him another apartment, getting his tickets to sporting events and trying to help his wife find a job.

Some of the tasks were outright bizarre, including a reported order to find and obtain a used Trump-brand mattress from a Trump hotel.

Despite the laundry list of ethics complaints putting him on thin ice, Pruitt was invited to and appeared at the White House Wednesday for Trump's Independence Day celebration, where he and other cabinet members received a shout-out from the president.

Pruitt made no mention of the various ethics complaints in his resignation letter, instead praising Trump for having "blessed me personally and enabled me to advance your agenda beyond what anyone anticipated."

But instead of taking responsibility, he pointed a finger at the pressure from critics including congressional Democrats.

"The unrelenting attacks on me personally, my family, are unprecedented and have taken a sizable toll on all of us," he wrote to Trump, in his letter posted by Fox News.

Trump's inner circle has had a revolving door since his first weeks in office, when he sacked national security advisor Michael Flynn.

Until now, Trump had stood by Pruitt -- a zealous lieutenant who strongly defended his decision to quit the Paris climate accords -- praising his work to roll back Obama-era environmental regulations that the president says hinder economic growth.

But the tone changed in recent weeks.

Last month, while praising Pruitt's "fantastic job" at the EPA, the president admitted, "I'm not happy about certain things, I'll be honest."

Congressional Democrats have called for Pruitt's ouster for months, and on Thursday their reaction to his departure was swift.

"Given Pruitt's complete failure to protect our clean air and water, and with 13 open federal investigations into his work, the only question is why this took so long."

Pruitt's exit came just days after a woman confronted him at a Washington restaurant and called on him to resign.