The armed group broke through the gates of the only state institution still nominally controlled by the opposition. 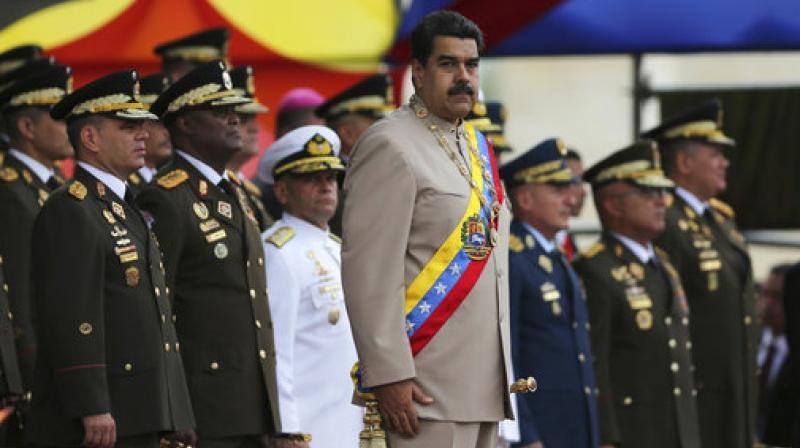 Later, a hundred or so government supporters at the gates of the legislature blocked 350 lawmakers, staffers and other people from leaving as a special independence day session of congress turned into a violent, nine-hour siege in which police avoided intervening.

In the end police and soldiers with shields formed a cordon to keep the government militants at bay as the lawmakers eventually were allowed to leave.

The armed group broke through the gates of the only state institution still nominally controlled by the opposition, in another episode of political violence following three months of chaos in the oil-rich but now poverty-stricken country.

The US State Department condemned the attack as "an assault on the democratic principles cherished by the men and women who struggled for Venezuela's independence 206 years ago today." It also criticized what it called the increasing authoritarianism of President Nicolas Maduro's government.

The attackers were supporting Maduro, who faces opposition demands for elections to remove him from office -- though he promptly denounced the violence.

"I absolutely condemn these deeds. I will never be complicit in any act of violence," Maduro said in a speech at a military parade in Caracas. He did not acknowledge that those who stormed congress were supporters of his side. "I have ordered an investigation, and may justice be done."

Military police guarding the site stood by as about 100 intruders brandishing sticks and pipes, and one of them a gun, broke through the front gate of the National Assembly and into the interior gardens and then the building itself, AFP reporters observed.

The mob reached the corridors of the congressional building, striking and injuring lawmakers and ordering journalists to leave the premises.

The intruders, some wearing masks, set off percussion bombs, triggering scenes of panic and chaos as police stood by and watched. Lawmakers barricaded themselves inside rooms with furniture and rugs. When it was all over, there were blood stains on walls.

The opposition said seven lawmakers were injured and five of them had to be hospitalized. Deputies also said that two employees of the assembly were hurt.

Besides the US, condemnation of the assault came from the Washington-based Organization of American States, Chile, and a regional trade bloc known as Mercosur.

"This does not hurt as much as seeing every day how we are losing our country," lawmaker Armando Armas told reporters as he got into an ambulance with his head wrapped in bloodied bandages.

During the later siege, government backers gathered at the gates screamed "killers" and "terrorists" at the opposition lawmakers inside. At one point, lawmaker Williams Davila of the foreign affairs commission told reporters, "we have been kidnapped."

Police with shields protected them as they finally filed out of the legislature building.

Protesters blame Maduro for a desperate economic crisis that has caused shortages of food, medicine and such basics as soap. He says the chaos is the result of a US-backed capitalist conspiracy by the opposition.

The opposition-controlled legislature was holding a special session to mark independence day when the government supporters burst in.

"We will not be intimidated by these acts of violence. No one here will surrender to this dictatorship," said senior opposition lawmaker Freddy Guevara.

Earlier Maduro's vice-president Tareck El Aissami had made an impromptu appearance in the congress along with the head of the armed forces, Vladimir Padrino Lopez, and ministers.

El Aissami made an address in which he called on supporters of Maduro to come to the legislature to show support for the president.

A crowd of Maduro supporters held a rally outside the building for several hours before breaking into the grounds during a recess.

- 'Tipping point' -
The government and opposition have accused each other of using armed groups to sow violence.

Maduro retains the public backing of the military high command -- a key factor in keeping him in power, according to analysts -- but the president last month said he was replacing four senior commanders of the armed forces.

Maduro has infuriated his opponents by launching a plan to form an assembly tasked with rewriting the constitution. Opponents say he will pack this constituent assembly with allies in a bid to cling to power.

Voting for members of the assembly is scheduled for July 30. "However, the political crisis is so fluid that the country could reach a tipping point before then," wrote analysts from the Eurasia Group consultancy last week in a note.

The opposition on Monday said it would hold a popular vote on July 16 against the constitutional reform plan.