US staring at "hardest week" of Covid19 crisis, officials warn 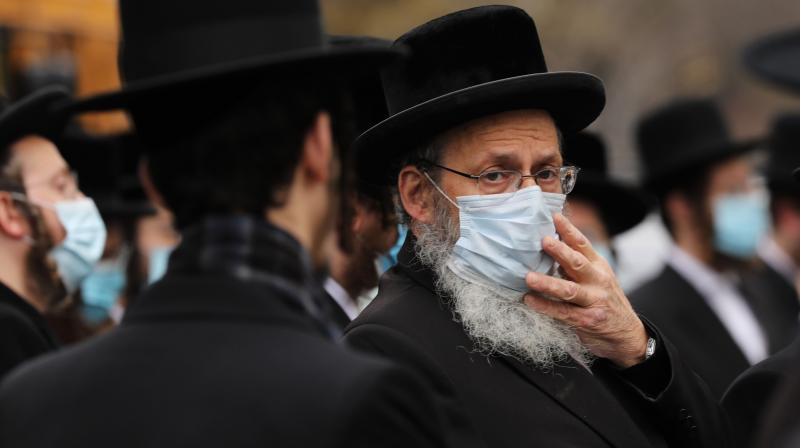 Hundreds of members of the Orthodox Jewish community attend the funeral for a rabbi who died from the coronavirus in New York. AFP Photo

New York: The United States is entering what a senior official warned on Sunday would be the “hardest” week of the coronavirus crisis as the death toll mounted, but some saw glimmers of hope from a slight slowing of fatalities in hard-hit New York.

New York, the epicenter of the U.S. coronavirus outbreak, reported on Sunday that for the first time in a week, deaths had fallen slightly from the day before. But there were still nearly 600 new fatalities and more than 7,300 new cases in the state.

Louisiana has become a hot spot for the virus, reporting a jump in deaths to nearly 500 and more than 13,000 cases. The governor predicted the state would run out of ventilators by Thursday.

Places such as Pennsylvania, Colorado and Washington, D.C., are also starting to see rising deaths.

“This is going to be the hardest and the saddest week of most Americans’ lives, quite frankly. This is going to be our Pearl Harbor moment, our 9/11 moment, only it’s not going to be localized,” U.S. Surgeon General Jerome Adams warned on Fox News on Sunday. “It’s going to be happening all over the country. And I want America to understand that.”

New York Governor Andrew Cuomo said on Sunday that new hospitalizations had fallen by 50% over the previous 24 hours. He cautioned that it was not yet clear whether the crisis was reaching a plateau in the state, which has a total of 4,159 deaths and more than 122,000 cases, by far the most of any U.S. state