US defence department said it was 'not aware' of any investigation that was conducted to ascertain if Pakistan had lost an F-16. 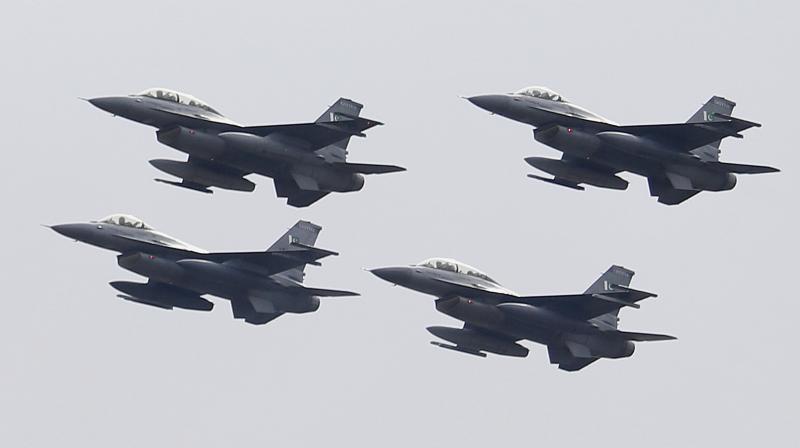 The state department was quick to distance itself from the news report when they were requested to confirm or deny it. (Photo:AP)

Washington: The United States defence department on Friday said it was “not aware” of any investigation that was conducted to ascertain if Pakistan had lost an F-16 in a fight with Indian fighter jets on February 27.

US-based news publication Foreign Policy had quoted senior but unidentified US defence sources saying that no F-16 was missing. This fact was strongly denied by India which reitereated that the Indian Air Force had indeed shot down an F-16.

Hindustan Times reported in a statement that the US defence department ‘was not aware of any investigation like the one doing the rounds'. The state department was quick to distance itself from the news report when they were requested to confirm or deny it. They made it clear that they did not publicly comment on details of government-to-government agreements, especially on articles related to defence.

Also Read: IAF sticks to its stand after US report says count none of Pak F-16 jets missing

They further went to reiterate their stand on Pakistan, citing that it was important to note that since January 2018, the United States government had suspended security assistance to that country.

US government's position appears to be well in line with the India, which in the backdrop of the attack, said that one Pakistani F-16 was taken down, citing 'electronic signature' as evidence. Air Vice Marshal RGV Kapoor had confirmed that, "during aerial engagements one MiG 21 Bison of the IAF shot down one F-16".

He had also said that Indian forces confirmed ejections at two different places on that day which were separated by no more than 8-10 kms. “One of the jets was an IAF MiG 21 Bison and the other a PAF aircraft.”

IAF Wing Commander Abhinandan Varthaman in his MiG 21 Bison had locked a PAF F-16 and apparently shot it before his own aircraft took a hit and he had to bail. Abhinandan landed in Pakistan and was captured by Pakistan's armed forces. The Pakistani aircraft, according to India, fell on Pakistani territory too. India further went on to say that it had pictures of the Pakistani pilot and even knew his name.

India also complained to the US that Pakistan used American supplied F-16s in the attack and gave further proof (pieces of an AMRAAM i.e advanced medium range air-to-air missile) about it. No other Pakistani aircraft is capable of firing these missiles.

Inspections of defence equipment sold to its foreign buyers are routinely carried out by the United States. According to the sale agreement, Pakistan is prohibited from flying F-16s out of the country without giving a heads-up to the United States.

The report went on to quote an unidentified senior defense official, who said “all aircraft were present and accounted for”. It also cited a second personnel to say no Pakistani F-16s were missing.