One of the key architects of the new healthcare bill, Seema Verma was the only non-politician to be asked to speak from the podium. 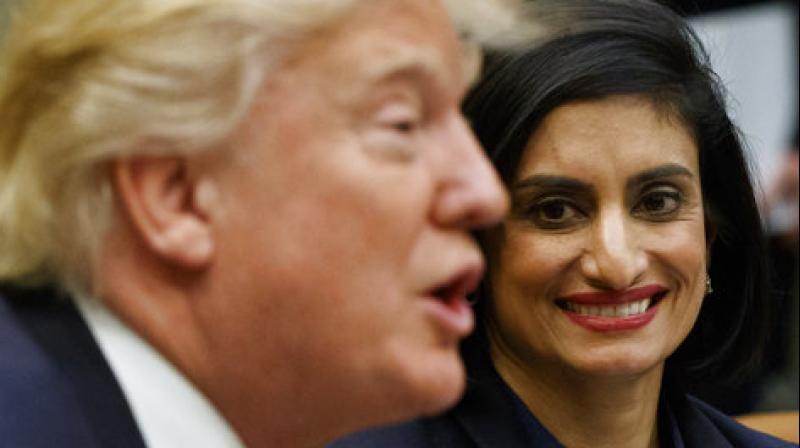 Both Trump and the Vice President Mike Pence have hailed Verma for the important role she has played in the new healthcare plan. (Photo: AP)

Washington: Indian-American Seema Verma, the key architect of the US' new healthcare bill, shared the podium with President Donald Trump who hailed her contribution in convincing several lawmakers on the need to repeal and replace Obamacare.

Verma as Administrator of the Centers for Medicare and Medicaid Services is one of the highest ranking Indian-American in the Trump administration after Nikki Haley, who is the US Ambassador to the United Nations.

In this capacity Verma made innumerable trips to the Capitol Hill and many a times accompanied the Vice President Mike Pence convincing top American lawmakers on the need to fix the current healthcare system by repealing the existing Obamacare and replacing it with a new health care bill.

Considered to be one of the key architects of the new healthcare bill, Verma was the only non-politician to be asked to speak from the podium at the Rose Garden as speaker as Trump rejoiced the passage of the legislation by the US House of Representatives that repealed Obamacare and replaced it with a new one.

"I've spoken to a lot of moms across the country like me, and they are so concerned about the rising cost of health care, paying for expensive premiums and high deductibles, having an insurance card that they can't use because it's still unaffordable," Verma said.

"These are people that have no other place to go but the Medicaid programme and the status quo in the Medicaid programme is not acceptable. We can do better. And the big step that was taken today is a very important stride towards making that programme work better, towards giving governors the flexibility to design programmes that are innovative and actually improve health outcomes," Verma said.

"I'm so excited about this big step forward and I think it's a great day for our country. So thank you for everybody that was involved in this," she said in her brief remarks.

Both Trump and the Vice President Mike Pence have hailed Verma for the important role she has played in the new healthcare plan. "We will have great, great health care for everyone in our nation. We have an unbelievable country, unbelievable country," Trump said on the occasion.

Verma who now lives in Indiana, received her bachelor's degree in life sciences from the University of Maryland College Park in 1993. In 2001 she founded the health policy consulting firm SVC Inc.

The company has worked with state insurance agencies and public health agencies in preparation for the implementation of the Affordable Care Act (Obamacare), and assisted Indiana and Kentucky, as well as other states, in the design of Medicaid expansion programmes under the ACA. Verma established her reputation with her work on Indiana's redesigned Medicaid programme.