The woman and baby were then taken to the hospital, where they are doing well, police said. 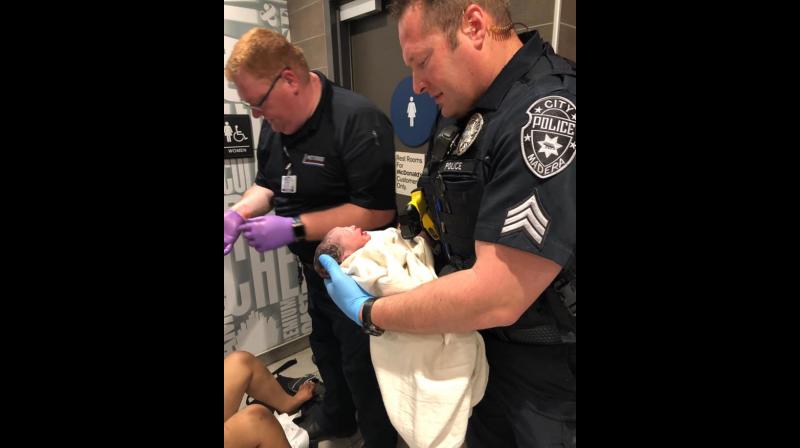 So they helped deliver the baby at the fast food restaurant, ushering into the world a healthy baby boy. (Photo: Facebook)

California: A woman gave birth to a baby boy at a McDonald’s restaurant in Madera, California on Monday night, said a City of Madera Police Department Facebook post.

“It’s not everyday you get to help deliver a new born baby at McDonalds. Last night, officers responded to McDonalds regarding a woman who was in active labor. The mother and the baby were transported to the hospital and they are both doing well,” the post read.

Soon after the post was published, it collected around 3,500 'likes' and hundreds of comments.

Several people commented on the birth. “She went in to active labor waiting on that ice cream machine. CONGRATULATIONS ON THE BABY!” a person wished on the comments section.

A few also shared their personal experiences where paramedics had helped them. While some got emotional looking at the picture. One of the netizens commented, “The way that officer is looking at that baby... it’s a proud day for Madera PD!!!”

The officers and paramedics from Pistoresi Ambulance received the call about the woman in labour.

After arriving, they realised that there was no time to transport the mom to the hospital. So they helped deliver the baby boy at the fast food restaurant.

The woman and baby were then taken to the hospital, where they are doing well, police said.

A baby was born in late March inside a McDonald’s restroom stall in Illinois.