Health care battle could decide balance of power in US

The battle over Obamacare will help to determine who will prevail in the 2018 midterms, and in the next presidential election. 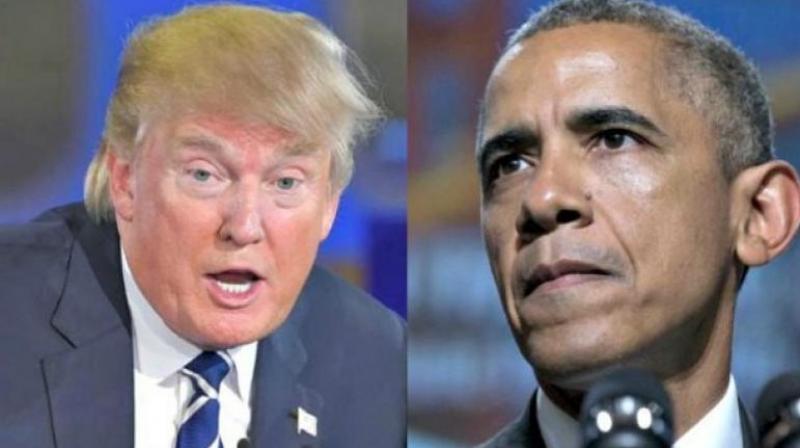 Washington: The messaging battle is over on repealing and replacing President Barack Obama's health care law, and the balance of power in Washington may be at stake.

Democrats believe they already lost the public opinion fight over the law once, when they pushed through the Affordable Care Act in the first place, and Republicans grabbed hold of the issue to drive Democrats into the minority. Democrats are determined that this time, they'll come out on top.

For their part, Republicans are painfully aware that they're embarking upon the task of repealing and replacing the complex law at their peril. If Democrats get their way, the GOP will own every problem and complication that results from the re-work, and there are certain to be many.

For both sides, the repeal-and-replace fight represents a risky and unexpected do-over nearly seven years after Democratic majorities in the House and Senate passed the law on a party-line vote. A voter backlash helped send Democrats into the minority in the House in the 2010 midterms, and Republicans have been using the issue to political benefit ever since. In November's elections, Donald Trump and GOP House and Senate candidates ran on promises to repeal the law and replace it with something better.

Now, Democrats have a chance to fight the messaging war anew, even as they continue to champion the health care law as good policy that's helped the country.

And Republicans, who've had political success attacking the law without offering a unified solution of their own, have a chance to present their ideas and make policy, but risk giving away their political advantage if they become the ones voters blame for problems in the health system.

Which side meets the challenge most effectively will help determine who prevails in the 2018 midterms, and in the next presidential election four years from now.

On Wednesday, as he unveiled Democrats' new attack line against the GOP - "Make America Sick Again" - Senate Minority Leader Chuck Schumer said that after the health law passed, voters blamed it for every problem related to health care, "and our Republicans colleagues and their message machine did it."

"Now, they're going to own it," Schumer said of the GOP. "And all the problems in the health care system, and there have been many throughout the years, no one has solved all of them, are going to be on their back."

Schumer made his comments after Democratic lawmakers met with Obama to discuss combating GOP efforts to undo the law, a new legislative initiative which got under way Wednesday with a procedural vote in the Senate.

Obama's message was to not cooperate with GOP replacement plans that don't offer a good solution for the 20 million Americans who gained health coverage under the law. He advised keeping the focus on those who benefited from the Affordable Care Act, such as people with pre-existing conditions who got coverage, and who might be hurt if their coverage were taken away.

And, he took on blame for Democrats' failure to sell the public on a law that by some measures has achieved its goals.

"I will take the responsibility for not having fully communicated with the American people for why this is an extraordinary victory for them," Obama said.

Even as Obama huddled with Democrats, Vice President-elect Mike Pence was meeting with Republicans across the Capitol, emerging to offer assurances that Republicans would make good on their repeated promises to repeal the law.

"The American people know who owns Obamacare. It's the first half of the title. It is Obama and the party of Obama," Pence insisted. "What President-elect Trump and I and the leaders in the Congress are determined to do is to keep faith with the American people."

Inside the meeting with House Republicans, Pence offered a more urgent message, advising Republicans to "go back to districts and lay the predicate that the Democrats own this thing," said GOP Rep. Dave Brat of Virginia. Trump himself offered a similar cautionary note over Twitter Wednesday, writing, "Don't let the Schumer clowns out of this web... Dems are to blame for the mess. It will fall of its own weight - be careful!"

Some Republicans are painfully aware that their own political fortunes could be at risk if they fumble the issue.

"I'm here because of Obamacare," said GOP Rep. Kevin Cramer of North Dakota, crediting the issue for his victory in 2012. And now, Cramer says, he risks losing his seat over Obamacare, "if we let our voters down in places like North Dakota by not acting decisively and swiftly."

Yet for now, even as they move toward repealing the law as early as next month, Republicans don't have a replacement plan, or even a timeline for offering one.

There's likely to be a years-long transition period between the repeal and the replacement, but many House Republicans, who stand for re-election every two years, believe it's urgent to get the replacement done before the 2018 midterms, or risk voter wrath.

"If it hasn't been done by the 2018s, it's like, 'What are you doing?'" said GOP Rep. Mark Amodei of Nevada. "If after five years of Republicans saying it sucks, we don't do a good job of transitioning and replacing, then Katie bar the door."