White men and older people in Georgia and Virginia are key parts of the Republican’s voter base, according to Edison polls 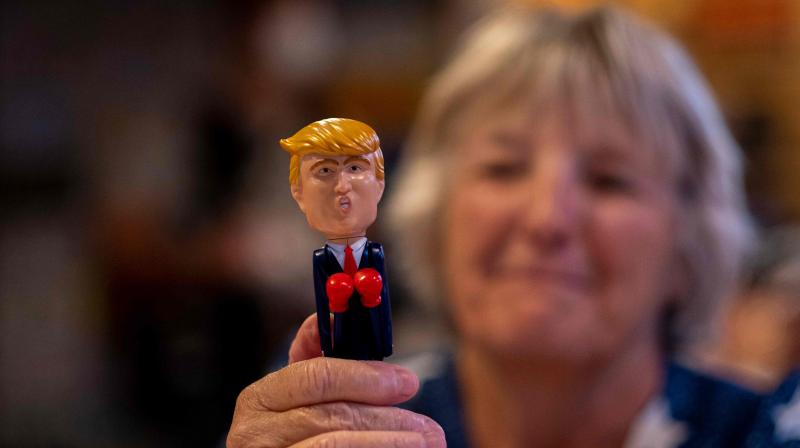 A woman shows a Donald Trump boxing figurine at an election night watch party organized by group "Villagers for Trump" in The Villages, Florida. (AFP)

As voting sites closed throughout the United States on Tuesday, exit polls conducted by Edison Research provided some insight on major issues driving the presidential vote and an early read on voter support.Here are some highlights from the poll, which is based on in-person interviews with voters on Tuesday, in-person interviews at early voting centers before Election Day and telephone interviews with people who voted by mail.

President Donald Trump appears to have lost some support among white men and older people in Georgia and Virginia, key parts of the Republican’s voter base, according to Edison polls. While Trump is still winning the majority of those voters, some of them switched to supporting his Democratic opponent, former Vice President Joe Biden, the exit polls showed.

Trump appeared to be performing better in Florida. If he wins the state, he may have the Latino vote to thank for it. According to exit polls, Trump and Biden were splitting the Latino vote. In 2016, Trump only won 4 out of 10 Latino voters in his race against Clinton. Overall, he was winning 3 of 10 nonwhite voters versus winning just 2 of 10 four years ago. Meanwhile, he maintained his advantage among white voters. According to Edison Research exit polls, six in 10 white voters said they cast ballots for Trump, which is unchanged from 2016. The Trump campaign made winning over Cuban-American voters in populous South Florida a top priority by emphasizing the administration’s hardline policy toward Cuba and Venezuela.

The national Edison Research poll results revealed deep concern about the coronavirus pandemic that has infected more than 9.4 million people in the United States this year and killed more than 230,000.

While only two of 10 voters nationally said COVID-19 was the issue that mattered most in their choice for president, half of U.S. voters believe it is more important to contain the coronavirus even if it hurts the economy. Trump has made the full opening of the U.S. economy a centerpiece of his re-election campaign, even as infections continue to rise. Biden has claimed Trump is undeserving of a second term because of his handling of the pandemic. In the national exit poll, four out of 10 voters said they think the effort to contain the virus is going “very badly.” In the battleground states of Florida and North Carolina, five of 10 voters said the national response to the pandemic is going “somewhat or very badly.” Six of 10 said the pandemic had created at least a moderate financial hardship. And seven in 10 said wearing a face mask in public is a “public health responsibility” versus three in 10 who see it as a personal choice. The poll found that nine out of 10 voters had already decided whom to vote for before October, and nine out of 10 voters said they were confident that their state would accurately count votes. One of 10 voters said they were voting for the first time, which was similar to the 2016 election survey.

Other issues that were top of mind for voters included the economy, racial inequality, crime and safety, and healthcare policy.