World   Americas  04 Jun 2017  Book on Saddam Hussain talks about his last days, experiences of his US guards
World, Americas

Book on Saddam Hussain talks about his last days, experiences of his US guards

Several of the guards had children, and Saddam would share anecdotes from his own fatherhood experience. 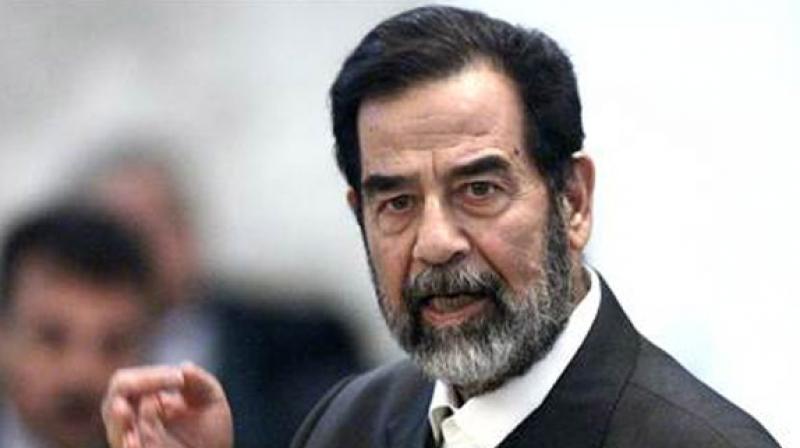 Though Saddam Hussein once owned dozens of marble palaces, he seemed reasonably content in his small prison cell, the report said. (Photo: AP)

The dictator's humble last days, and the experiences of his American guards, are recounted in Will Bardenwerper's new book, 'The Prisoner in His Palace: Saddam Hussein, His American Guards, and What History Leaves Unsaid', the New York Post reported.

Saddam, who ruled Iraq for three decades, was hanged in 2006 at the age of 69. As he awaited trial in Baghdad, Saddam was watched over by a group of US soldiers from the 551st Military Police Company, who came to call themselves 'The Super Twelve'.

The 12 American soldiers guarding Saddam initially forged a bond among themselves during their six months as the Iraqi dictator's private guards. However, the crew apparently bonded with Saddam too -- right to his bitter end, the report said.

Among the guards was the author of the book. Saddam enjoyed tending to a scrubby patch of dirt at one corner of his outdoor area, watering the weeds and "treating them more like beautiful flowers than the ugly growths they were," Bardenwerper writes.

He was meticulous about his food, too, he ate his breakfast in sections, first an omelet, then a muffin, followed by fresh fruit. If the omelet was "torn," he would reject it, according to the book. One of the Super Twelve specialists noted that Saddam was especially given to sweets.

"He supposed it made Saddam less intimidating, that he could yield to the siren call of a sugary muffin the way anyone else might," Bardenwerper writes. Saddam seemed genuinely interested in his guards' lives.

Several of the guards had children, and Saddam would share anecdotes from his own fatherhood experience. One story about disciplining children was memorable. Saddam recounted to his guards that his son Uday once made a "terrible mistake" that made Saddam "very angry".

Uday had, in fact, shot up a party, killing several people and wounding several more.
"I was very angry with him so I burned all his cars," Saddam told the guards, referring to Uday's large collection of luxury automobiles, including hundreds of Rolls-Royces,
Ferraris and Porsches, according to the book.

"Laughing wildly, the former dictator recalled how he gleefully watched the inferno," writes Bardenwerper. Saddam also listened to the radio and "he'd always stop tuning if he stumbled across a Mary J Blige song" and liked to ride a rickety exercise bike that he called his "pony", according to the book.

His guards were struck by Saddam's appreciation of simple pleasures. Though he once owned dozens of marble palaces, he seemed reasonably content in his small prison cell, the report said.