Schear refused to heed the request of airline staff to take the toddler in his arms. 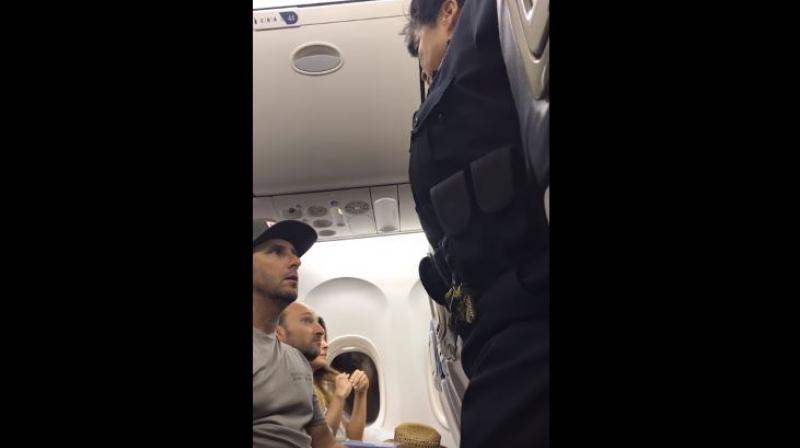 Eventually, the Schear family was thrown out of the plane (Photo: Screengrab)

Los Angeles: An American family was asked to deboard a Delta Airlines flight heading to Los Angeles, as they turned down a plea to give up a seat on which their young son was sitting.

According to report in Mirror, Brian Schear, who was travelling home from Hawaii along with his wife and two-year-old son was threatened with jail, if he refused to disembark from the flight.

The matter escalated when one of the airline employees walked up to Brian Schear and asked him to vacate his toddler’s seat for another fellow passenger, as the flight was already overbooked.

The airline staff told Schear that since the flight was overbooked and the seat hadn’t been used by its original passenger, they had to vacate the seat for another passenger, as per the company’s protocol.

Schear originally booked the seat for his 18-year-old son Mason, but he was sent home on an earlier flight so that the seat could be used for his younger child

Initially, Schear refused to heed the request of airline staff to take the toddler in his arms. However, when he finally agreed, the couple was instead asked to leave the plane.

After Schear declined to embark, the staffer threatened to send the couple to jail. She said, "You have to give up the seat or you're going to jail, your wife is going to jail and they'll take your kids from you."

Brian’s wife said that it was terrifying that they were threatened by the airline despite being right.

Schear filmed the incident and has uploaded it on social media.

Eventually, the Schear family was thrown out of the plane. They had to spend another USD 2000 to book flight tickets, this time with United Airlines.