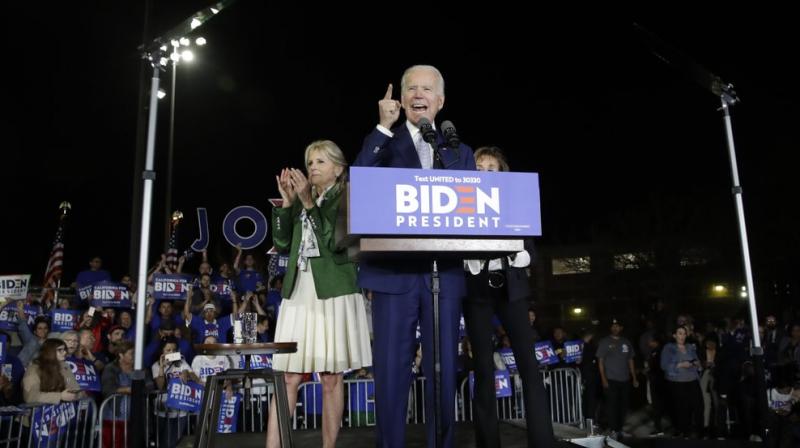 Washington: Bernie Sanders seized Super Tuesday’s biggest prize with a victory in California, while a resurgent Joe Biden scored wins across the country with the backing of a diverse coalition as the Democratic Party’s once-crowded presidential field transformed into a two-man contest.

The two Democrats, lifelong politicians with starkly different visions for America’s future, were battling for delegates as 14 states and one U.S. territory held a series of high-stakes elections that marked the most significant day of voting in the party’s 2020 presidential nomination fight.

The clash between Biden and Sanders, each leading coalitions of disparate demographics and political beliefs, peaked on a day that could determine whether the Democratic battle will stretch all the way to the July convention or be decided much sooner.

The former vice president and the three-term senator took aim at each other from dueling victory speeches separated by 2,500 miles (4,000 kilometers) Tuesday night.

“People are talking about a revolution. We started a movement,” Biden charged in Los Angeles, knocking one of Sanders’ signature lines.

And without citing his surging rival by name, Sanders swiped at Biden from a victory speech in Burlington, Vermont.

“You cannot beat Trump with the same-old, same-old kind of politics,” Sanders declared, ticking down a list of past policy differences with Biden on Social Security, trade and military force. “This will become a contrast in ideas.”

Mike Bloomberg’s sole victory was in the territory of American Samoa. The billionaire former New York mayor, who threw more than a half a billion dollars into the Super Tuesday states, will reassess his campaign on Wednesday, according to a person close to his operation who spoke on the condition of anonymity to describe internal deliberations.

Elizabeth Warren had yet to post any early wins and lost her home state of Massachusetts to Biden in a devastating defeat. She ultimately finished third in the state.