World   Americas  04 Feb 2017  There is more than one story to be told about Muslims in Trump’s America
World, Americas

In Trump's America, racism and bigotry has become widespread. But instances of racism, can be seen from different perspectives as well. 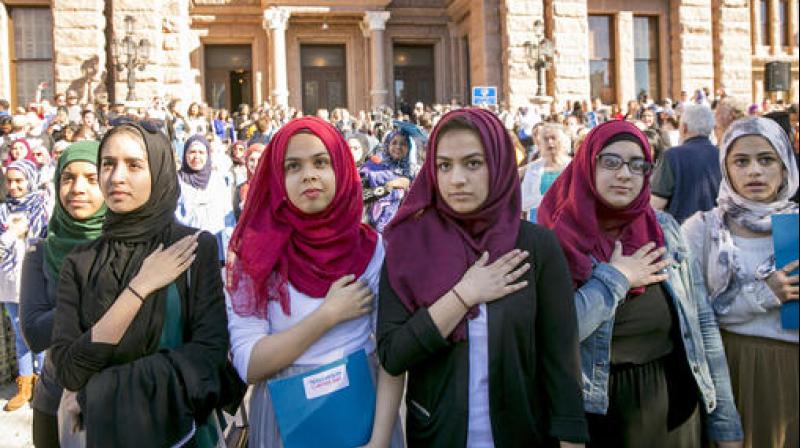 Washington: Let me tell you two stories that happened to two different people. Both concern religion in North America.

Register how you feel about each of them.

Story one: “Why are you not Christian?” a man asks you.

Story two: You wake up to find someone has left a Bible on your doorstep.

Which of these sounds more violent, more threatening to you? Or neither?

Now, imagine yourself a Muslim woman wearing a headscarf in a Western country and repeat the two stories to yourself again. How would you feel?

Now let me complete each story and give you some context.

“Why are you not Christian?” the man asked, kindly, in broken English.

“We believe in Jesus and the Bible,” I said, wanting to comfort him, “and we have a lot of Christians in Egypt where I come from.”

This happened to me in Houston, Texas around 2007 or 2008. The man was a plumber coming in to fix my sink. He found it difficult to express himself in English but seemed to care about saving my soul, however misguided that was.

It didn’t occur to me to be offended or afraid. This was a time when America was on the cusp of electing either a black president, a female president or at least a female vice president. Houston, despite what all my American friends had told me before I left Egypt, was not a generally racist place to live.

Half of the surgery fellows working with my husband at the Texas Heart Institute were Muslim. Some strangers said “Assalamu Alaikum” (peace be upon you) to me on the streets, or stopped me and my friends to comment on the beauty of our colourful headscarves.

You wake up to find someone has left a Bible on your doorstep. This happened to a friend in North America, soon after Donald Trump was elected president. She felt it was a threat or a subtle act of violence. She wondered how her neighbours would feel if she placed a Qur’an on their doorsteps.

When I heard my friend’s story, it got me thinking about the possible intentions of the person who placed that Bible on her doorstep.

I trust that my friend’s feeling of being threatened was real in that context. But I wondered if the story might have been different. What if the story had included a note inside the Bible, showing who had left it, or giving an invitation to exchange holy books?

What if the Bible on the doorstep had been the beginning of a dialogue rather than a way to scare someone away? And if the person who left the Bible on my friend’s doorstep didn’t have bad intentions, why didn’t they do it in person and look her in the eye?

There are differences between story one and two, chief among them are context and power. The political context and who the actors are make a difference to the story. An elderly, Hispanic plumber fixing my sink? Not a threat to my 20-something self in Houston, accompanying my surgeon husband doing a fellowship at a prestigious nearby hospital.

Had I been asked the same question by a white man, in an angry voice, in another context, my reaction would probably have been very different.

I am telling this story in the era where we are lamenting the rise of fake news and exploring our roles as educators to respond to it, as if a technical solution to figuring out if something is a lie will fix our problems. It won’t. Because it’s not a technical problem.

Donald Trump’s executive order banning people from seven Muslim-majority countries from entering the US is not fake news. It’s real news. And as a community, we have to deal with it.

“Power is the ability not just to tell the story of another person, but to make it the definitive story of that person. The Palestinian poet Mourid Barghouti writes that if you want to dispossess a people, the simplest way to do it is to tell their story and to start with, ‘secondly’. Start the story with the arrows of the Native Americans, and not with the arrival of the British, and you have an entirely different story. Start the story with the failure of the African state, and not with the colonial creation of the African state, and you have an entirely different story.”

The media does this all the time. So do politicians – we see Donald Trump right now, talking about banning Iraqi refugees and immigrants from entering the US, without mentioning the role of his country in causing the instability that motivated the immigration in the first place.

In my view, the best way to ensure that we and our children see more than the stereotypical story about people who are different from us is to expose them and ourselves to multiple stories. The bare minimum is to expose ourselves to other cultures on their own terms.

So, for example, we don’t learn about Native Americans from Pocahontas or from Western films. We learn from Native Americans themselves. If we don’t have direct access to them (I live a long way away in Egypt), find them online. Read or listen or even, if you’re lucky, converse.

I know what you’re thinking. I’m Muslim, talking about Muslims in America. What brought this on? But in the midst of my concern over Muslims in America, I also noticed Trump’s presidential memo to advance approval of the Dakota Access Pipeline, I can see the injustice in this, and the irony: on the one hand, a “nation of immigrants” that is neither honouring immigrants, nor honouring the original residents of this land.

We will always have blind spots towards cultures that are unfamiliar to us. But the more deeply we establish understanding of the “other”, the more we try to empathise, with social justice as our underlying value, the more likely we are to become empathetic, critical, global citizens. As educators, we must expand and diversify the people in our in-groups, and help students do this too.

Education expert Sean Michael Morris, on the day of Trump’s inauguration, urged us to change the way we teach. He wrote:

“An education that convinces us of what needs to be known, what is important versus what is frivolous, is not an education. It’s training at best, conscription at worst. And all it prepares us to do is to believe what we’re told.”

This goes for parents and mentors as well as those of us in more formal teaching roles.

The best way not to believe what we’re told is not to go fact-checking each and every thing we hear. Instead, I propose we start building our ability to understand people who are different from us, in context, rather than relying on harmful stereotypes. To know them as individuals, as they would like to be known, not as some dominant power (or US president) has decided we shall know them.

This is not quick or simple. But it can allow us to form a view of the world that rises above deception and to see what’s important in our humanity. And it will change the way we vote. When we empathise with others, we imagine how our decisions can impact them.

Remember those two stories I mentioned earlier? Back in 2007 and 2008, I felt comfortable and safe praying in a mosque in Houston. Now, I would not, given the latest news of Islamophobic violence in mosques coming from North America, most recently the terrorist attack on a mosque in Quebec City that left six people dead.

My friend with the Bible on her doorstep, a dual citizen, was unable to attend a conference in the US a few days ago.

But that isn’t the biggest tragedy. The tragic stories are those of families torn apart by this executive order. Parents who cannot reach their children. What we need now, more than ever, is empathy.

This article has been reprinted from The Conversation Global with permission.