Nancy Pelosi re-elected as Speaker of US House of Representatives

Following the election of the House Speaker, Pelosi administered the oath to the rest of the members of the House 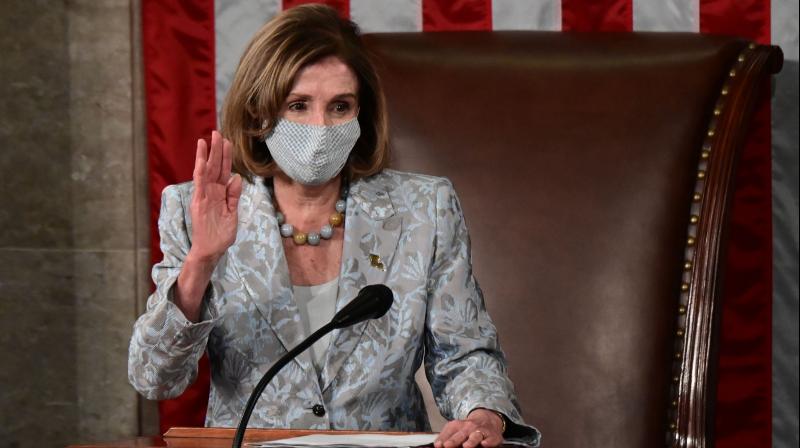 House Speaker Nancy Pelosi takes her oath of office as the Speaker of the 117th Congress after being re-elected at the U.S. Capitol in Washington, Sunday, January. 3, 2021. (Erin Scott/Pool via AP)

Washington: Veteran Democratic Congresswoman Nancy Pelosi has been narrowly re-elected as the Speaker of the US House of Representatives for a fourth time, as a new Congress took office amidst raging coronavirus crisis and political uncertainty.

Pelosi, 80, secured 216 votes in a tight contest against Republican Kevin McCarthy, who got support from 209 Congressmen, after Democrats lost 11 seats in the November elections to command a narrower 222-212 majority.

According to the House Clerk, a total of 427 votes were cast. One vote went to Senator Tammy Duckworth and one to Congressman Hakeem Jeffries.

"I am honored to be nominated by my colleagues to serve as the Speaker of the House for the 117th Congress," Pelosi said in a tweet on Sunday.

Notably, six Democratic lawmakers did not vote for Pelosi, while all the 209 Republicans stood by McCarthy, who is now the House Minority Leader. The Democratic Party has 222 seats in the House.

Following the election of the House Speaker, Pelosi administered the oath to the rest of the members of the House starting with the first-time members elect. The US House of Representatives has a strength of 435 voting members and six non-voting members.

"Our work for the people continues, even in the face of this unprecedented national crisis. Tune in as I swear in Members of the 117th Congress. As we are sworn in today, we accept a responsibility as daunting and demanding as any that previous generations of leadership have faced. Our most urgent priority will continue to be defeating the coronavirus - and defeat it, we will!" Pelosi said.

"We owe it to the American people to Build Back Better in a way that advances justice throughout our country," she said.

After serving for 17 years in charge of the House Democrats, Pelosi ran unopposed in her election. She is the first woman to be the Speaker, leading the House from 2006 to 2011, and since the Democrats took back the House in 2018.

"It gives (me) great pride to serve as speaker of the most diverse House of Representatives in the history of our country," she said.

Pelosi received two more votes than the 2014 votes, which is the majority of members who participated in the election by voting for someone by name, soon thereafter announced that this is her last term as the House Speaker.

Pelosi has led the House Democrats since 2003. In 2007, she created history by becoming the first women speaker of the House. She was re-elected in 2009. She served as the House Minority Leader from 2011 to 2019, when she was elected as the Speaker after Democratic Party gained control of the House.

"Jill and I extend our warmest congratulations to Speaker Pelosi on her well-deserved reelection today as Speaker of the House of Representatives. A trailblazing leader - and one of the most effective and accomplished legislators in our nation's history - I have no doubt that Speaker Pelosi will continue to lead the House with dignity, principle, and patriotic resolve," President-elect Biden said in a statement.

"Congratulations to fellow Californian, @SpeakerPelosi, for being reelected as Speaker of the House. I look forward to working together on behalf of the American people to move our nation forward and build a brighter future for generations to come," Vice President-elect Kamala Harris said in a tweet.

A strong advocate of human rights issues, a follower of Mahatma Gandhi and a strong supporter of the India-US relationship, Pelosi, in her acceptance speech, said that the new Congress begins during a time of extraordinary difficulty.

"Each of our communities has been drastically affected by the pandemic and economic crisis: 3,50,000 tragic deaths, each one a sadness that we carry in our hearts; over 20 million infections; millions without jobs - a toll almost beyond comprehension," she said.

Pelosi represents the eighth Congressional District of California, which is in and around San Francisco.

The 117th Congress is the most diverse House in American history - with a record-shattering 122 women, 100 years after women won the right to vote, she said.

The House has four Indian-American lawmakers. Ami Bera, being the senior most of them, who has been re-elected for the fifth consecutive term. Raja Krishnamoorthi, Ro Khanna and Pramila Jayapal have been reelected for third consecutive term. Jayapal is the first-ever Indian American woman elected to the House.

Setting up her priorities for the 117th Congress, Pelosi said that this is the time for the nation to heal, given the sufferings due to the coronavirus pandemic. Our most urgent priority will continue to be defeating coronavirus.

"And defeat it, we will. Two weeks ago, we passed an emergency relief package to crush the virus and put money in the pockets of workers and families, which is now the law," she said.

"With President-elect Joe Biden and Vice President-elect Kamala Harris, the House will continue our work to save lives and livelihoods, to Build Back Better in a way that advances justice in America.

"Indeed, the pandemic has pulled back the curtain on even worsened disparities in our economy and our society. We must pursue justice: economic justice, justice in health, racial justice, environmental and climate justice," Pelosi said.

The Senate remains Republican run ahead of elections in Georgia on Tuesday, giving its members a platform to again air President Donald Trump's unverified claims that his loss to Democratic President-elect Biden was the result of fraud.