Dhaliwal, was the first Sikh sheriff's deputy in Harris County with a population of over 10,000 Sikhs. 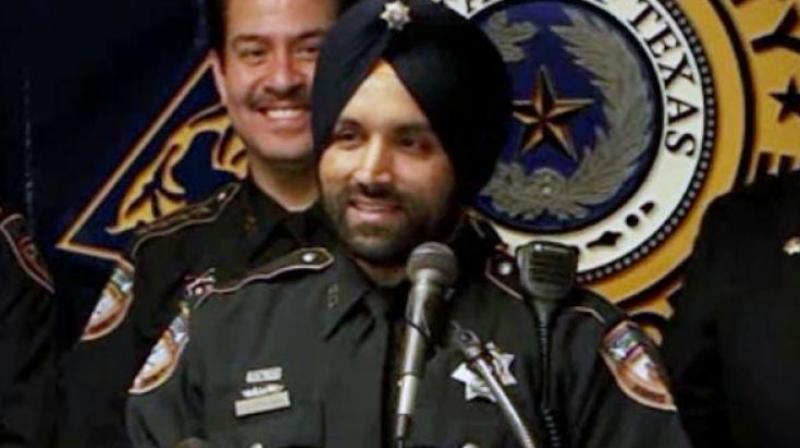 Houston: Thousands of people from all walks of life including police officers, Sikh believers, Indian-Americans and Houston-area residents turned out for the daylong ceremonies on early Wednesday to honour slain police officer Sandeep Singh Dhaliwal, who was shot dead on duty during a traffic stop last week.

Dhaliwal (42), was the first Sikh sheriff's deputy in Harris County with a population of over 10,000 Sikhs.

Dhaliwal made national headlines when he was allowed to grow a beard and wear a turban on the job.

He was gunned down while conducting a routine mid-day traffic stop in the northwest of Houston on Friday.

The fallen deputy's funeral included processions, a traditional Sikh funeral and a law enforcement funeral with a 21-gun salute from fellow officers and a helicopter flyover.

As 'Amazing Grace' was played on the bagpipes, members of HCSO folded the American flag that covered his casket and Sheriff Ed Gonzalez presented it to Dhaliwal's widow who clutched it to her heart.

Helicopters flew overhead followed by a 21-gun salute. After final ceremonies from the law enforcement memorial service at Berry Center, the Dhaliwal family and members of HCSO headed to the Winford Funeral Home for a closed cremation.

Following a final prayer by the Dhaliwal family, HCSO officers moved his casket into a hearse to escort it to the funeral home for cremation.

The rest of the community and mourners were invited to Gurdwara Sikh National Center at 7500 North Sam Houston Parkway West for the langar (communal meal).

The procession route was lined with blue and white signs reading "Always in Our Hearts," and "In Loving Memory of Deputy Dhaliwal." People had posted custom yard signs, billboards and flowers all along the route and in the neighbourhood.

The Sikh National Center had requested dress code for those attending the ceremonies to be navy blue, just like the Harris County Sheriff's Office uniform.

At the service, Simratpal Singh, a US Army Captain, flanked by other members of the Sikh community in military service, described Dhaliwal as "humble, fearless, not dissuaded by negativity."

"Our lion may be gone physically but his legacy of selfless service and of breaking down barriers will continue to live," he said.

Sen. Ted Cruz, R-Texas, speaking before thousands during the Sikh part of the ceremony, addressed Dhaliwal's wife and three children in saying the community "supports you and lifts you up."

"We are grateful for your father's service, and his sacrifice and his legacy," Cruz said.

Dhaliwal, the father of three joined the force 10 years back and was the state's first law enforcement officer to receive permission to wear a religious turban and beard while on duty.

Commissioner Adrian Garcia who hired Dhaliwal 10 years ago said the stadium full of people and the deputy's celebration of life was "fit for a king."

As he addressed Dhaliwal's father, he said, "Baba, you raised a good man. You raised him with a heart of gold. It is unfair that a father should outlive his son."

Lt. Gov. Dan Patrick said he doesn't normally speak at public funerals but he was honoured to be invited to speak at Dhaliwal's funeral. "Since 2015, we've lost 50... 50 men and women of law enforcement in the line of duty and Deputy Dhaliwal was the fiftieth," he said.

"He (Sandeep) did more in his life than some people do in a hundred years,” he added.

Houston Mayor Sylvester Turner said it was "moments like these when we fall on our faith."

"He (Dhaliwal) was the ambassador of all that is good. And the way he died does not erase that," Turner said.

"In a city that happens to be the most diverse in the country, is a city, because of this one person, on this day and hopefully days to come, will be the most unified it has ever been," added Turner.

Gonzalez said Dhaliwal was a trailblazer and wore his Sikh faith on the outside for all to see.

"He (Dhaliwal) saw in our profession the opportunity to serve with a deeper purpose and to make a positive difference and he succeeded far beyond his own dreams and expectations," Gonzalez said.

"Sandeep was an inspiration to us all and was considered to be one of our finest deputies, with a bright future to match his beautiful bright personality. I will miss the gentle smile and embrace I received each time I saw him," he said.

The services on Wednesday followed a candlelight vigil by the sheriff's office for Dhaliwal on Monday and a 48-hour-long prayer-vigil at the Gurdwara Sikh National Center."

The public was invited to attend the viewing and funeral services. Services were held at the Berry Center, which can accommodate up to 8,000 people.

Dhaliwal was killed in the town of Cypress after pulling over a vehicle for running a stop sign.

Investigators said video from a dashboard camera shows the suspect, 47-year-old Robert Solis, getting out of his car, approaching Dhaliwal from behind and shooting him twice in the head.

Law enforcement officials said Solis had a warrant for his arrest on parole violations and likely feared that his arrest would mean a return to prison.

Solis, who has been charged with capital murder, was arrested at a nearby grocery parking lot.