Trump, who ran his campaign against any gun control laws, did not mention it in his two remarks on Monday. 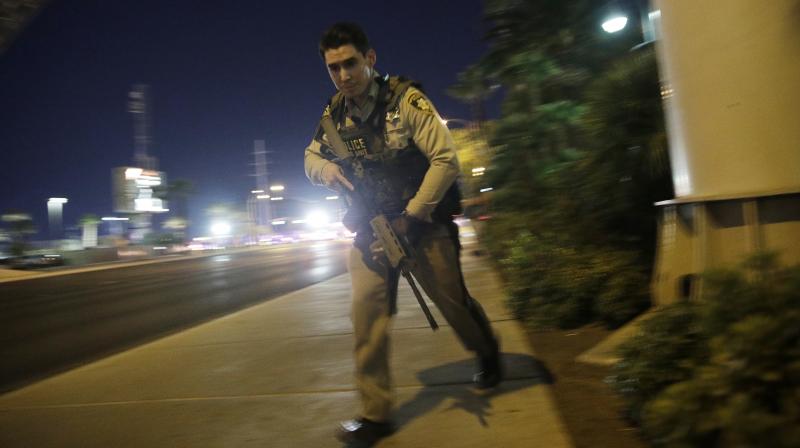 A police officer runs along a sidewalk near a shooting near the Mandalay Bay resort and casino on the Las Vegas Strip, Sunday (Photo: AP)

Washington: The deadliest mass shooting in modern US history at Las Vegas that killed at least 58 people and injured over 500 others has rekindled the debate on gun control laws in America.

On an average, more than 90 Americans lose their lives to gun violence every day, a daily toll of heartbreak and tragedy in communities across the US.

Experts believe that the last night incident, which President Donald Trump termed as an "act of pure evil", is unlikely to bridge the bitter differences between the pro- and anti-gun control law lobbies in the country.

Trump, who ran his campaign against any gun control laws, did not mention it in his two remarks on Monday during which he said that this is "a very very sad" day for him.

Responding to questions, White House Press Secretary Sarah Sanders said Monday that is the day of reflection and mourning and not a day to discuss political issues.

Referring to Chicago, she said gun control laws have not been helpful.

Taking a lead, Congresswoman Nancy Pelosi, the Democratic leader, sought off a letter to House Speaker Paul Ryan on creation of a Standing Committee on gun violence and passage of common-sense legislation on gun control.

"Congress has a moral duty to address this horrific and heartbreaking epidemic. Charged with the solemn duty to protect and defend the American people, we must respond to these tragedies with courage, unity and decisive action," Pelosi said in her letter to Ryan.

The Congress, she said, must pass the bipartisan King- Thompson legislation to strengthen the life-saving background checks that keep guns out of the wrong hands. But this is only a first step, she said.

"I urge you to create a Select Committee on Gun Violence to study and report back common sense legislation to help end this crisis. The bipartisan committee would make recommendations to prevent unspeakable tragedies such as the mass shooting in Las Vegas and to restore confidence in the safety of our communities," Pelosi said.

Congressman Kathy Castor said: "Certainly, we can come together to pass common sense safety requirements such as background checks and limits on civilian use of military-style weapons and to enforce the laws on the books.

"The sorrow that I and so many around the country feel for the innocent men and women whose lives were cruelly cut short by this heartless act of domestic terrorism is immeasurable".

Congressman Earl Blumenauer said: "From Orlando to Roseburg, OR and now Las Vegas, the carnage has only continued. Thoughts and prayers will not stop future tragedy. Enough is enough. My hope is that sanity will prevail, and Republican leadership in Congress will muster up the courage to act".

The right-wing and NRA messaging point that nothing could have been done to prevent the horrific attack in Las Vegas is just wrong, he said.

Over two years ago, he had released a comprehensive plan to deal with gun violence like the public health epidemic that it is, the lawmaker said, adding that the solutions should not be hard.

"Every day that we fail to act puts more innocent lives at risk. It is long past time to fix our gun laws. Congress has a moral responsibility to act and address the daily tragedy of gun violence in our communities," he said.

Last week, he said, Republicans planned to vote on a bill that would loosen gun laws, instead of strengthening them.

In light of the tragedy in Las Vegas, and the ongoing tragedy of gun violence in America, this could not be more inappropriate. The American people deserve a vote on legislation that will curb gun violence, including reinstating an assault weapons ban and instituting new restrictions on gun trafficking, Carson said.

Congressman Alcee L Hastings said that more than 33,000 people will die from gun violence this year.

"With each new tragedy that occurs, those who stand in the way of legislation to address our country’s gun violence epidemic are increasingly culpable for its continuation," he said.

"Trump, who ran as a champion of gun rights throughout his campaign, is unlikely to directly tackle the issue of gun control and, in fact, rolled back a restriction that made it more difficult for people with mental illnesses to purchase a gun," a report in Newsweek said.

Acts of mass gun violence, reported The Washington Post, "Have done little to change the strong partisan divide on the issue".

Most Democrats argue that the incidents heighten the need for tighter gun laws, while most Republicans think Americans should have a greater ability to protect themselves, the daily said.