Qaani was described by Khamenei as one of the 'most decorated commanders' of the Guards during the 1980-88 Iran-Iraq war. 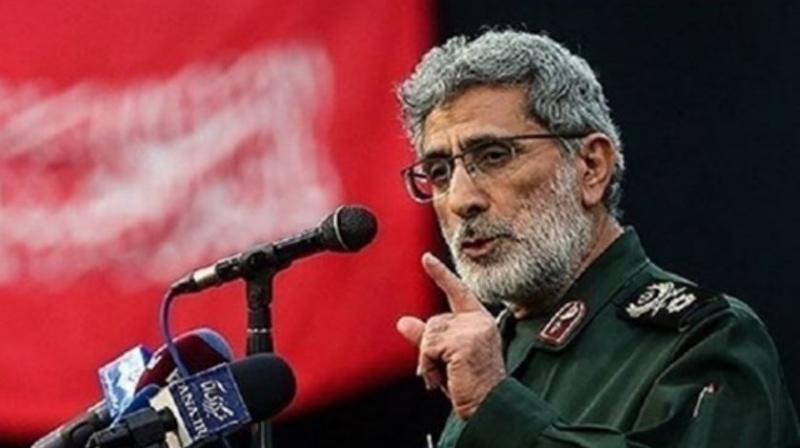 'The orders for the (Quds) force remain exactly as they were during the leadership of martyr Soleimani," said Khameini. "I call on the members of the force to be present and cooperate with General Qaani and wish him divine prosperity, acceptance and guidance.' (Photo: Twitter)

Tehran: Iran's supreme leader appointed Esmail Qaani as the new head of the Revolutionary Guards' foreign operations arm after its commander, Qasem Soleimani, was killed on Friday in a US strike on Baghdad airport.

"Following the martyrdom of the glorious general haj Qasem Soleimani, I name Brigadier General Esmail Qaani as the commander of the Quds Force of the Islamic Revolutionary Guard Corps," Ayatollah Ali Khamenei said in a statement posted on his official website.

Qaani was described by Khamenei as one of the 'most decorated commanders' of the Guards during the 1980-88 Iran-Iraq war.

"The orders for the (Quds) force remain exactly as they were during the leadership of martyr Soleimani," said Khameini. "I call on the members of the force to be present and cooperate with General Qaani and wish him divine prosperity, acceptance and guidance."

"We call on everyone to restrain themselves," Saleh said in a statement, characterising the strike as an 'aggression' and saying Iraq would be destabilised if 'voices of reason' did not prevail.

Tens of thousands of people took to the streets of Tehran to protest against American 'crimes', reported an AFP correspondent, after Soleimani was killed in the strike.

Chanting "Death to America" and holding up posters of Soleimani, the demonstrators filled streets for several blocks in central Tehran after Friday prayers.

Meanwhile, the leader of Iran's opposition group that has been in exile, the National Council of Resistance of Iran (NCRI), called the killing an "irreparable blow" for Iran's Islamic regime.

The killing is an "irreparable blow for the regime of the mullahs", Maryam Rajavi, the head of the NCRI, said in a statement issued in Paris.

"It is now time to expel the mullahs from the region, in particular Iraq, Syria and Lebanon," she added. Rajavi accused Soleimani of being "one of the biggest criminals in Iran's history" and "personally implicated in the massacre of thousands of people in the region."

"With his elimination, the process of overthrowing the mullahs' regime will be greatly accelerated," she added.

The NCRI, the political wing of the People's Mujahedin of Iran (PMOI), has long pressed for the overthrow for the Iranian regime from its Paris base.

Following the airstrike, the NATO military alliance has been monitoring the situation in Iraq closely with an eye to the safety of its training mission there.

"NATO is monitoring the situation in the region very closely. We remain in close and regular contact with the US authorities," said its spokesperson Dylan White. "At the request of the Iraqi government, NATO's training mission in the country is helping to strengthen the Iraqi forces and prevent the return of ISIS."

Earlier in the day Iran's foreign minister, Mohammad Javad Zarif, had said that US' move targetting Suleimani would come with grave consequences as he described the slain general as "the most effective force fighting Daesh (ISIS)".

Fearing a fallout over the strike, the US embassy in Baghdad has urged all American citizens in Iraq to "depart immediately".

“US citizens should depart via airline while possible, and failing that, to other countries via land," the embassy said in a statement.