The NDAA-19 capped aid at to USD 150 million but removed certain conditions like action against Haqqani Network or Lashkar-e-Taiba (LeT). 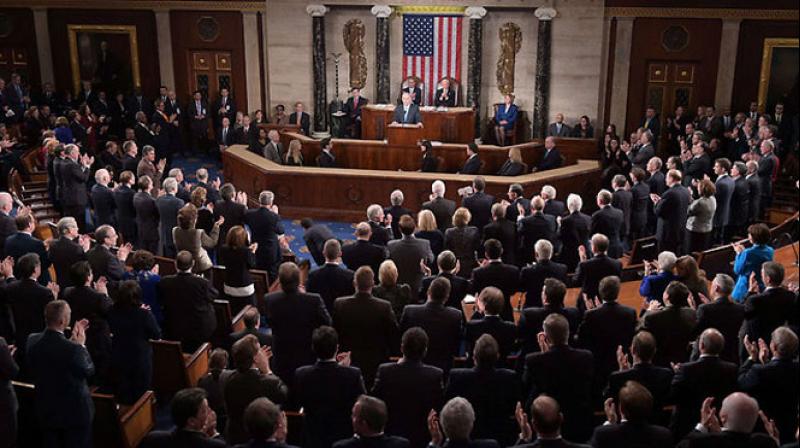 This is significantly below the historic level of more than USD 1 billion per year. (Photo: File/AFP)

Washington: Amidst tensions in bilateral ties, the US Congress has passed a defence spending bill capping its security-related aid to Pakistan at USD 150 million, significantly below the historic level of more than USD 1 billion per year.

The National Defense Authorisation Act-2019 (NDAA-19), however, removes certain conditions, like action against Haqqani Network or the Lashkar-e-Taiba (LeT), as was the case in the past few years for disbursement of US aid to Pakistan.

"The legislation reduces the total amount of funds provided for reimbursement to Pakistan to USD 150 million. This is a significant reduction from the USD 700 million that was authorised through Coalition Support Fund (CSF) last year," Anish Goel, who was part of Barack Obama's White House National Security Council, told news agency PTI.

However, in doing so, the legislation gets rid of the certification requirements for Pakistan's action against the Haqqani Network and it also gets rid of the authority to reimburse Pakistan for counter-terrorism, he said.

"Hence, the Pentagon no longer has any tools to put pressure on Pakistan to undertake counter-terrorism activities or action against the Haqqani Network," Mr Goel, who till recently was a senior staffer in the Senate Armed Services Committee, said.

During the previous Obama administration, Pakistan used to get nearly USD 1.2 billion aid from the United States under the Enhanced Partnership with Pakistan Act of 2009  also known as the Kerry-Lugar-Berman Act.

US President Donald Trump since assuming office has been tough on Pakistan over its inaction against terror groups. President Trump in August last year unveiled his new South Asia policy and asked Pakistan to do more against such terror groups.

The US in January suspended more than USD 1.15 billion security assistance to Pakistan, accusing it of harbouring terror groups like the Afghan Taliban and the Haqqani Network within its border and showing unwillingness to take "decisive actions" against them.

The US has also voiced its disapproval of growing Chinese involvement in Pakistan, adding to tensions in bilateral ties. US Secretary of State Mike Pompeo on Monday had cautioned the IMF (International Monetary Fund) against a possible fresh bailout for Pakistan's new government to pay off Chinese lenders who have invested in the strategic China-Pakistan Economic Corridor.

Joshua White, who was also a part of then President Obama's White House National Security Council team and worked on Pakistan, said this year's defence legislation significantly reduces the amount of security assistance that Pakistan can theoretically receive outside of traditional Foreign Military Financing.

"It makes Pakistan ineligible for Coalition Support Funds (CSF), but adds Pakistan to a list of countries that can receive a related form of assistance designed to help partner nations bolster border security," Mr White told news agency PTI and observed, "This legislation is a mixed blessing for Pakistan."

"On one hand, these new border security funds will be capped at USD 150 million per year, significantly below historical levels of CSF. On the other hand, the legislation does away with the onerous reporting requirements and certifications that have, in practice, made it difficult for Pakistan to receive such funds," he said.

The former White House official noted that it is important to consider this legislation in the current political context.

The Trump administration has effectively frozen security assistance to Pakistan, and this new legislation will do nothing in the short-term to change that, he said.

"It does, however, mean that if the administration decides to resume some form of modest security assistance in the future, it will be authorised by the Congress to do so without having to produce detailed reports and make difficult certifications regarding Pakistan's support vis-a-vis the Haqqani Network and other threats to the United States," Mr White said.

"Over the longer term, that could prove to be a win for Pakistan," he said, while noting that in theory, the new funding authority does not permit counter-terrorism assistance, but only assistance related to border security.

"In practice, these terms are so malleable that I do not expect that the Pentagon would find itself very limited as to the kind of support it could provide," Mr White said.

Tags: us military aid to pakistan, us security aid, ndaa-19, us senate