Russian interference in US election: Former FBI chief Comey to testify next week

Comey was leading the FBI's probe into Russia's interference in US election, and his firing by Trump on May 9 sparked a political uproar. 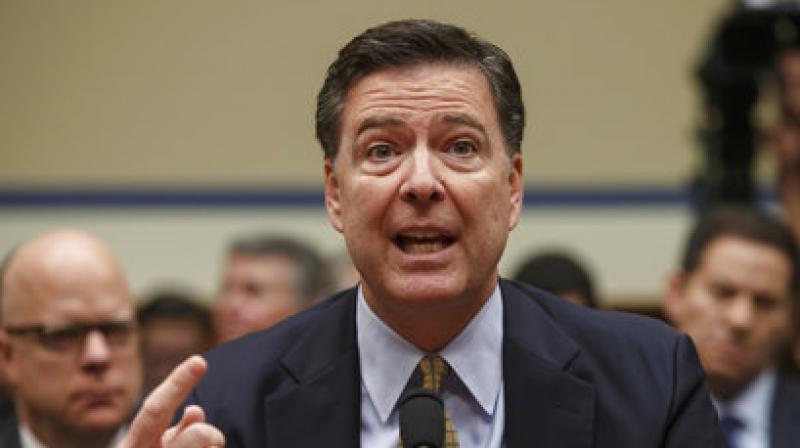 Washington: Former FBI Director James Comey will testify on next Thursday before a US Senate panel investigating Russia's alleged meddling in the 2016 US election, in a hearing that could add to difficulties facing President Donald Trump.

In his first public appearance since Trump fired him on May 9, Comey will address the Senate Intelligence Committee in both an open session and behind closed doors, which would allow him to discuss classified information, the committee said on Thursday.

Comey was leading the FBI's probe into the allegations, and his firing sparked a political uproar. Facing rising pressure, the Justice Department in May named Robert Mueller, another former FBI chief, as a special counsel to investigate the matter.

The Justice Department and multiple US congressional committees are investigating Russia's actions in the 2016 presidential election and questions about possible collusion between Russian officials and Trump campaign associates.

At next week's hearing, Comey is expected to be asked about conversations in which Trump is reported to have pressured him to drop an investigation into former national security adviser Michael Flynn, whose ties to Russia are under scrutiny.

Controversy erupted again this week after the Republican Head of the House of Representatives Intelligence Committee, Devin Nunes, approved subpoenas to the CIA, FBI and National Security Agency for information related to the ‘unmasking’ of the names of Trump campaign advisers inadvertently picked up in top-secret foreign communications intercepts.

The White House and Nunes have alleged that former democratic President Barack Obama's administration eavesdropped on Trump's campaign, an assertion that Comey has disputed and current US officials dismiss as absurd.

Four current and former US officials who have reviewed the materials told Reuters there was no evidence that political motives drove Obama's aides to request the names be unredacted.

"There is no substance to this, so the only way to look at it is as an attempt to distract the headlines and the public from Comey's public testimony and Mueller's investigation, both of which are serious," said one of the US officials familiar with the information Nunes subpoenaed.

Committee aides complained Nunes had acted unilaterally, and the top Democrat on the panel, Representative Adam Schiff, said Nunes' actions violated his earlier decision to rescue himself from the Russia probe.

Democratic Representative Jackie Speier said it appeared that Nunes was "more concerned with pushing the White House narrative than seeking the truth."

Trump on Thursday renewed his allegation, without citing evidence, that his campaign communications were monitored, saying in a tweet: "The big story is the 'unmasking and surveillance' of people that took place during the Obama administration."

Nunes followed suit hours later, tweeting: "Seeing a lot of fake news from media elites and others who have no interest in violations of Americans' civil liberties via unmaskings."

The names of US citizens mentioned in foreign communications intercepted by US intelligence agencies are normally redacted, or ‘masked,’ in intelligence reports.

The requests to unmask the names of Trump associates underwent the same stringent evaluations that US privacy laws and intelligence regulations require for all such applications, and they produced nothing out of the ordinary, said the four officials, who spoke on condition of anonymity.

At most, only one of the requests related to Russia in any way, and the rest pertained to other countries, two of them said.

The requests involved between 30 and 40 top-secret reports on intercepted communications in which foreign officials outside the United States mentioned the Trump campaign and people involved in it, the officials said. The reports contained no evidence that any Americans were targets of US eavesdropping operations, they said.

Russia has repeatedly denied any effort to interfere in the US election, but Russian President Vladimir Putin said on Thursday some Russians might have acted on their own without their government's involvement.

Trump has denied any collusion between Russia and his campaign. He has repeatedly questioned the US intelligence finding that Putin directed an operation that included computer hacking, fake news and propaganda intended to swing the election in Trump's favour against democratic rival Hillary Clinton.