The former mayor of South Bend, Indiana scored poorly in the latest primary in South Carolina 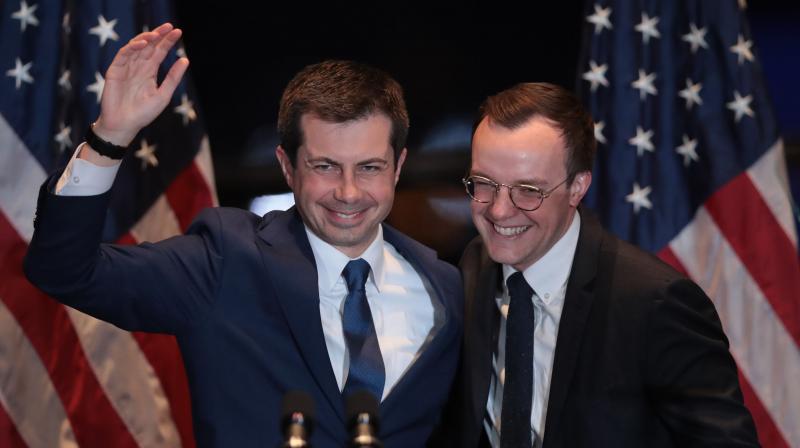 With his husband Chasten by his side, former South Bend, Indiana Mayor Pete Buttigieg announces he is ending campaign to be the Democratic nominee for president during a speech at the Century Center. AFP Photo

Washington: Pete Buttigieg, the first openly gay US presidential candidate from a major party, on Sunday ended his campaign to be the Democratic nominee in the November election against Donald Trump.

The 38-year-old had risen rapidly from being a virtual unknown to becoming a national political figure, but he scored poorly in the latest primary in South Carolina, coming fourth with just eight percent.

He was scheduled to address supporters later Sunday in South Bend, Indiana, where he was previously the mayor.

His aides told US media that the former military veteran who served in Afghanistan would officially suspend his campaign.

Buttigieg emerged as the surprise major player in the contest when securing a narrow victory in the Iowa caucuses, earning widespread attention for his unflustered and professional approach in an often bitter Democratic nomination battle.

But his showing in South Carolina on Saturday confirmed polls suggesting that he struggled to attract support among black voters -- a key demographic.

Joe Biden's resounding victory in South Carolina has thrust him back into the race just days before voters go to the polls in 14 states on “Super Tuesday.”With 48 percent of the vote in South Carolina, Biden more than doubled the 20 percent won by national frontrunner Bernie Sanders -- positioning him as the leftist senator's main rival.