In a viral image, Putin and Saudi prince gave each other an effusive handshake as if they were long-lost friends reunited. 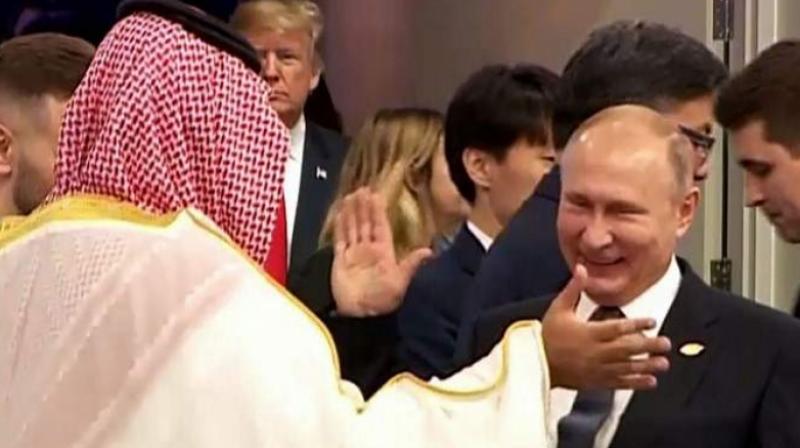 Their embrace comes amid reports that Russia and Saudi Arabia have reached a pact to cut oil production when the OPEC cartel meets on December 6 in Vienna, to help shore up collapsing crude prices. (Photo: AFP)

Buenos Aires: Saudi Crown Prince Mohammed bin Salman showed himself to be no pariah Friday at the G20 summit, with a beaming Vladimir Putin welcoming him but European leaders warning him over the killing of a dissident journalist.

Less than two months after Saudi Arabia outraged allies when a hit team murdered Jamal Khashoggi in the kingdom's Istanbul consulate, Prince Mohammed flew into Buenos Aires to take his place among leaders of the top 20 global economies, a sign that he intends to remain firmly in charge.

In an image that quickly went viral online, Russian President Putin and the 33-year-old prince grinned broadly and gave each other an effusive handshake as if they were long-lost friends reunited at the G20.

Their embrace comes amid reports that Russia and Saudi Arabia have reached a pact to cut oil production when the OPEC cartel meets on December 6 in Vienna, to help shore up collapsing crude prices.

But the prince appeared to receive a more critical reception from French President Emmanuel Macron, who was overheard on a microphone voicing concerns.

"Don't worry," Prince Mohammed is heard saying in English to the French leader, who responds, "I do worry. I am worried."

The clip was partially inaudible and the context of the exchange was not entirely clear.

But it received wide traction on social media, with Macron telling the prince, "You never listen to me," to which Prince Mohammed replies, "I will listen, of course."

The French presidency said that Macron spoke to the prince about the killing of Khashoggi and the Saudi-led offensive in Yemen, where millions are on the brink of starvation in what the United Nations calls the world's worst humanitarian crisis.

Macron told the prince that Europeans wanted international investigators to take part in the probe on Khashoggi's death and stressed "the necessity of a political solution in Yemen," the Elysee Palace said.

The prince was also seen chatting with President Donald Trump and his daughter Ivanka, although in a nod to US domestic outrage over Saudi Arabia, the White House downplayed the encounter.

"They exchanged pleasantries at the leaders' session as he did with nearly every leader in attendance," a senior White House official said.

Trump, meanwhile, said "we had no discussion. We might, but we had none."

Until Khashoggi's killing, Trump had been an unabashed fan of the prince as the young leader who portrays himself as a reformist consolidated power and detained prominent Saudis, with the heir apparent forging a particularly close relationship with Ivanka's husband Jared Kushner.

Trump has since voiced sadness over the killing of Khashoggi, who lived in the United States and wrote for The Washington Post.

But, in an exclamation point-heavy statement before the summit, Trump said it did not matter whether Prince Mohammed knew about Khashoggi's death because Saudi Arabia was important for US business and for its hostility to Iran.

The US Senate nonetheless moved this week to end support for the Saudi-led war against rebels in Yemen amid outrage over attacks on civilian sites including a school bus and hospitals.

British Prime Minister Theresa May, speaking to Sky News before the summit, said she would press the crown prince both on Yemen and Khashoggi at the G20.

"The Saudi Arabians need to ensure that their investigation is a full investigation, that it's credible, that it's transparent, and that people can have confidence in the outcome of it, and that those responsible are held to account," May said.

China "will continue to stick together with the Arab country on issues involving their core interests," Xinhua quoted Xi as telling the prince.