George H W Bush, the 41st president of the United States, lived longer than any of his predecessors. 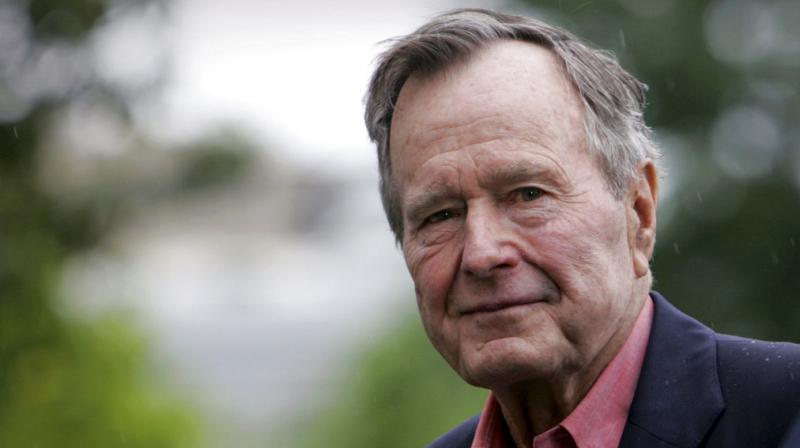 Former President George H W Bush dies at the age of 94 on Friday, November 30, 2018, about eight months after the death of his wife, Barbara Bush. (Photo: AP)

Houston: George H W Bush, the 41st president of the US who led America during the collapse of the Soviet Union and the turning back of an Iraqi invasion of Kuwait, died on Friday. He was 94.

His death, which was announced by his office, came less than eight months after that of his wife of 73 years, Barbara Bush.

"Jeb, Neil, Marvin, Doro, and I are saddened to announce that after 94 remarkable years, our dear Dad has died," George Bush Jr, who went on to serve as the 43rd US president, said in a statement.

He was "a man of the highest character and the best dad a son or daughter could ask for. The entire Bush family is deeply grateful for 41's life and love, for the compassion of those who have cared and prayed for Dad, and for the condolences of our friends and fellow citizens," Bush Jr added.

Statement by the 43rd President of the United States, George W. Bush, on the passing of his father this evening at the age 94. pic.twitter.com/oTiDq1cE7h

President Bush was suffering from Parkinson's disease that forced him to use a wheelchair in recent years, and he had been in and out of hospitals in recent months as his health declined.

There were fears that after his wife, Barbara, died in April, Bush might die, too.

He was admitted to a hospital with a blood infection on April 23, one day after the funeral for the former first lady, and remained there for 13 days.

He was hospitalised again in May for low blood pressure and fatigue a week after arriving in Maine to spend the summer.

He was released a few days later and celebrated his birthday on June 12 - making history by becoming the first former president to reach the age of 94.

The decorated war pilot and former CIA chief was elected president on November 8, 1988.

During his term in office, a revolution of human liberty swept the globe, emancipating tens of millions of people and unleashing a series of transformative events: collapse of the Soviet Union and the end of the Cold War; the Berlin Wall "fell", and Germany united within NATO following 45 years of postwar division. From Eastern Europe to the Baltic States to Latin America to the former Soviet republics, many liberal democracies supplanted totalitarian regimes.

During this "historic period of cooperation" as he called it, President Bush worked with Soviet leader Mikhail Gorbachev and other key global figures to end the Cold War peacefully and usher in a new geopolitical era marked by political self-determination, the spread of market capitalism, and the opening of closed economies.

He subsequently convened the Madrid Peace Conference in the Fall of 1991, bringing Israel and her Arab neighbours together in face-to-face discussions for the first time in history.

Bush Sr was born on June 12, 1924 in Milton, Massachusetts into a wealthy New England political dynasty. He married Barbara Pierce in January 1945, shortly before the War War II ended, and the couple went on to have six children, including one, Robin, who died as a child.

President Bush, or "41" as he was informally known after George W. was elected president, considered Houston, Texas his home - and Walker's Point, the family home where he spent a part of every summer except 1944 (when he was serving in World War II), as his "anchor to windward."