Illegal crops also reduce the rainforest, such as Colombian coca cultivation, which covers roughly 170,000 hectares, according to UN data. 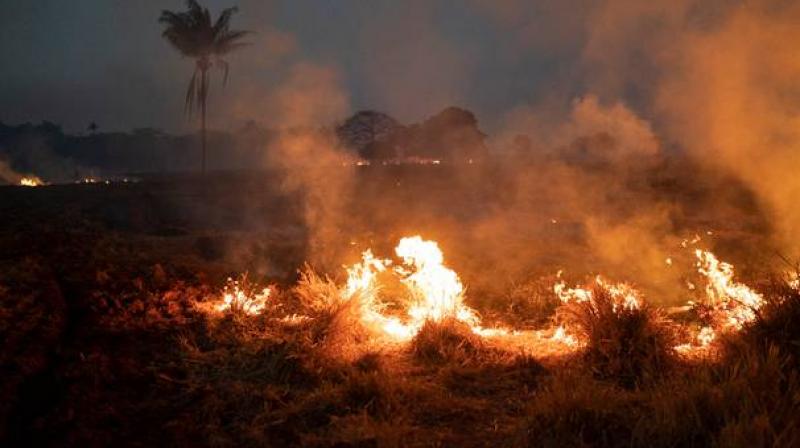 The number of fires in Brazil's Amazon basin is still on the rise, even though the government has banned burning, officials have said. (Photo: File)

Sao Paulo: The number of fires in Brazil's Amazon basin is still on the rise, even though the government has banned burning, officials have said.

In the first 48 hours since the ban was issued, satellite data from the National Space Research Institute (INPE) showed 3,859 new outbreaks of fire, of which some 2,000 were concentrated in the Amazon region. From January to the end of August, 51.9 per cent of Brazil's recorded 88,816 fires were in the rainforest, according to the INPE, a number experts call a dramatic, direct consequence of farmers' widespread deforestation.

Brazil's Amazon region is in its dry season, but experts note that 2019 has been wetter than previous years -- they also stress that there are no natural fires in the Amazon.

The no-burn decree may have been too little too late, and more of a political than practical gesture, some analysts say. Deforestation has surged this year as agencies tasked with monitoring illegal activities were weakened by right-wing President Jair Bolsonaro.

Often called the Trump of the Tropics, Bolsonaro has questioned climate change, and argues farmers sometimes need the land for their livelihood. Since the weekend thousands of troops, firefighters, and aircraft have been deployed, and the defense ministry says the fires are under control.

Bolsonaro claimed in a live Facebook broadcast Thursday "this year's fires are below the average of recent years." Deforestation for farming is one of the most serious threats to the rainforest and is a problem present in Bolivia, Brazil, Colombia, Ecuador, French Guiana, Guyana, Peru, Suriname and Venezuela. Farmers in Brazil, Peru, Ecuador and Bolivia commonly set fires in the dry season to clear the undergrowth in deforested areas.

However, this often leads to uncontrolled burning, which takes a greater toll on the rainforest. Much to environmentalists' chagrin, Bolivia's government recently authorised farmers to burn 20 hectares (almost 50 acres) instead of the usual five hectares (12 acres) -- which is believed to have contributed to thousands of wildfires that razed 1.2 million hectares of grassland and forest since May.

Illegal crops also reduce the rainforest, such as Colombian coca cultivation, which covers roughly 170,000 hectares, according to UN data. Significant damage is also done by illegal mining operations, which is compounded by the use of chemicals such as mercury -- particularly in gold mining -- which contaminates soil and streams.