World   Americas  01 Jun 2020  Why are journalists targeted amid the attacks?
World, Americas 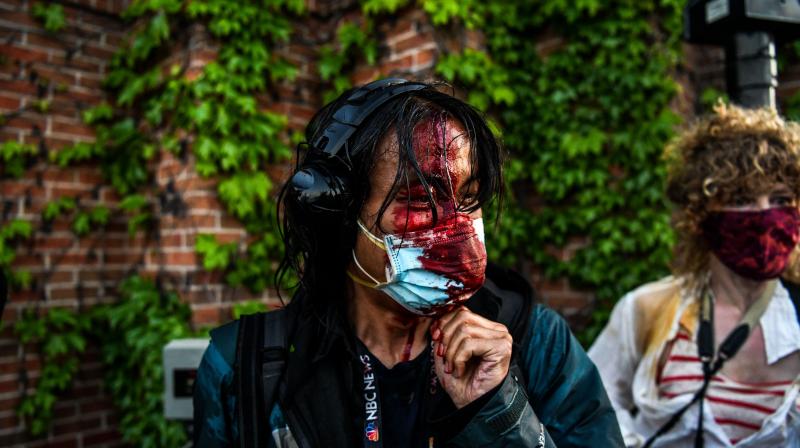 A journalist is seen bleeding after police started firing tear gas and rubber bullets near the 5th police precinct following a demonstration to call for justice for George Floyd. (AFP)

On Friday evening, viewers watched as CNN correspondent Omar Jimenez and his crew were arrested on live television while covering a protest following the death of George Floyd in Minneapolis.

By Saturday, as protesters and the police clashed across the nation, reporter Kaitlin Rust from Louisville, Kentucky local station WAVE News screamed on air “I’m getting shot! I’m getting shot!” as cameras caught her and her crew being targeted at gunpoint and shot at by local police with pepper balls.

Over a three-day period, organizations that track press violence documented about two dozen acts of violence, including an incident on Saturday night in Minneapolis during which Reuters journalist Julio-Cesar Chavez and Reuters security adviser Rodney Seward were struck and injured by rubber bullets.

From Los Angeles to Minneapolis to New York, what seemed like isolated attacks on the press at political rallies and protests over the last few years intensified as trust in media is near a decade low, some media experts said.

“It is an extremely scary place to be and not a place where journalists have felt since 1968 in this country,” said Bruce Brown, executive director of the Reporters Committee for Freedom of the Press, referring to journalists being harassed at the Democratic National Convention in Chicago.

“The numerous, targeted attacks that journalists reporting on protests across the country have faced from law enforcement over the last two nights are both reprehensible and clear violations of the First Amendment,” he said.

Freedom of speech and the press are enshrined, among other freedoms, in the First Amendment of the U.S. Constitution.

The attacks, which come amid the anti-media rhetoric of U.S. President Donald Trump, have been levelled at media organizations across the political spectrum.

Leland Vittert, a Fox News correspondent with experience in war zones, and his crew were attacked by demonstrators near the White House on Friday after being identified as an employee of Fox News. “It’s the most scared I’ve been since being caught in a mob that turned on us in Tahrir Square (in Cairo, Egypt),” Vittert said in an interview with Reuters on Sunday.

Vittert recalled how the public perception of the media similarly deteriorated during his time covering the Middle East. “We saw that transition happen where those who we reported on went from being glad we were there to tell our stories to viewing us as potential targets,” he said. “And now we’re seeing that same shift in America which is terrifying.”

Since taking office in 2017, Trump has frequently lashed out at the media.

“There’s a campaign of vilification of the media by President Trump,” said Courtney Radsch, advocacy director at the Committee to Protect Journalists.

Radsch said this is also occurring as protesters “want to control their narrative as well. Everyone wants to go directly to public with their version of events.”

On Sunday, the president wrote on Twitter: “The Lamestream Media is doing everything within their power to foment hatred and anarchy. As long as everybody understands what they are doing, that they are FAKE NEWS and truly bad people with a sick agenda, we can easily work through them to GREATNESS!”

Some Trump supporters in the past have played down the backlash against the media and the president’s role in it, saying the media had eroded its own credibility with partisan reporting.

“He (Trump) is not the only trigger,” Brown said. But, “If he were to stop attacking journalists, that would help a lot.”

Watching journalists get arrested and attacked on television sends a message to viewers that there are no repercussions for the violence, media experts say.

The governor of Minnesota apologized for the arrest of CNN’s journalists and the Louisville police department apologized if Rust was singled out for being a reporter. No actions have been taken so far against the officers involved.

Fox and CNN both condemned the actions taken against their journalists and other members of the media.

A Reuters spokeswoman said the news organization strongly objects to police firing rubber bullets at its crew in Minneapolis and is addressing the situation with authorities.

“It was clear that both our reporter and security adviser were members of the press and not a threat to public order. Journalists must be allowed to report the news without fear of harassment or harm,” the spokeswoman said in a statement.