The Justice Department estimated in late February that there were 25,000 people waiting in Mexico for hearings in US court for immigration 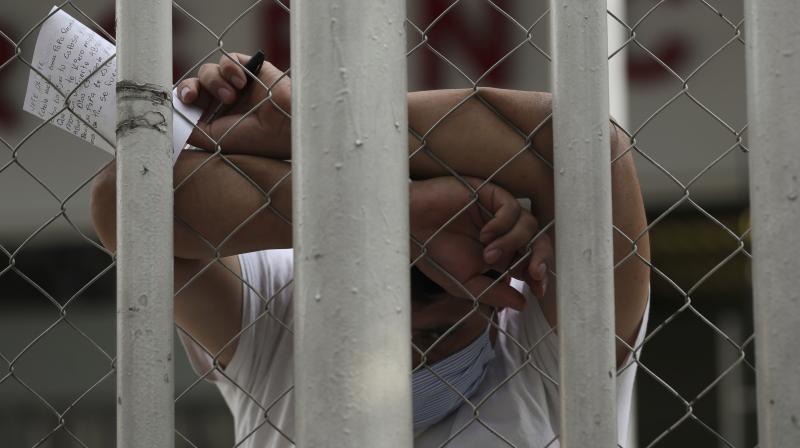 A hospitalized patient's relative takes a break after he wrote a letter as the only way to communicated with the patient, outside a public hospital in Iztapalapa, Mexico City. (AP)

San Diego: The Trump administration on Thursday suspended immigration court hearings for asylum-seekers waiting in Mexico through June 1, bowing to public health concerns while extending a state of limbo those locked down in Mexican migrant shelters.

With an order suspending hearings through Friday set to expire, the Homeland Security and Justice departments said that asylum-seekers with hearings through June 1 should appear at a border crossing when instructed to get new dates.

They said in a joint statement that authorities will review conditions related to the coronavirus and proceed as expeditiously as possible, raising the prospect of additional delays.

While it is difficult to know precisely, the Justice Department estimated in late February that there were 25,000 people waiting in Mexico for hearings in US court.

A woman who fled Nicaragua with her 9-year-old son said on Thursday that the delays mean more time locked down in a Tijuana shelter, which, like many in the Mexican border city, stopped accepting new migrants and won't let anyone already there leave to work or shop to prevent the virus from spreading.

She moved to the shelter in March after a family that subsidised her rent ended their support due to a job loss.

Mileidy, the woman's middle name, said she showed up at a San Diego crossing for her fifth hearing under heavy rain at 3 am on April 7, an hour ahead of the appointed time. She said she was unable to reach US officials for a new date but learned online that her next hearing was May 7.

About a week ago, Mileidy's attorney got notice that her hearing was delayed again, this time to June 16. She spoke on condition that her full name not be published due to fears for her personal safety.

All of this time in Mexico is nerve-wracking, said Mileidy, who ran out of epilepsy medicine for her son and has been unable to get a new supply.

More than 60,000 asylum-seekers have been returned to Mexico to wait for hearings in US court since January 2019, when the US introduced its Migrant Protection Protocols policy, known informally as Remain in Mexico.

It became a key pillar of the administration's response to an unprecedented surge of asylum-seeking families at the border, drawing criticism for having people wait in highly dangerous Mexican cities.

Barely 1% of the nearly 45,000 Return to Mexico cases decided through March won asylum, according to Syracuse University's Transactional Records Access Clearinghouse. Nearly all people represent themselves, with barely 6% having attorneys.

The future of Remain in Mexico has become less certain after the administration temporarily suspended immigration laws using a 1944 public-health law, whisking Mexicans and Central Americans to the nearest border to be returned to Mexico without a chance to seek asylum.

Nearly 10,000 people were expelled in less than three weeks after the emergency move took effect on March 21.

Jewish Family Service of San Diego continues to get 15 to 20 requests a week on its hotline from asylum-seekers subject to Remain in Mexico who wants legal representation, said attorney Luis Gonzalez, who is handling Mileidy's case.

"Right now it's a little challenging to say, 'Yes, I can represent you,' when we don't know when their next hearing will be," Gonzalez said. "We really can't commit to a case."

The Justice Department, which oversees immigration courts, has also suspended hearings for people who are released in the United States through May 15 in response to COVID-19, exacerbating a backlog of about 1.1 million cases.

Hearings continue for people held in detention centers despite calls for a total shutdown from unions representing immigration judges and Homeland Security Department attorneys as well as immigration lawyers.